Alabama is a state in the southern United States. The state has 5 million inhabitants (2021) and an area of 135,765 km², about 3.5 times the size of the Netherlands. The capital is Montgomery, the largest city is Birmingham.

Alabama is located in the southern United States and has a coastline with the Gulf of Mexico. The state is bordered by Mississippi to the west, Tennessee to the north, Georgia to the east, and Florida to the south. Alabama measures a maximum of 530 kilometers from north to south and 335 kilometers from west to east. Large parts of Alabama are densely forested. To the south is a large river delta of several slow-flowing rivers that converge as the Mobile River. The northern half of Alabama has some ridges, especially around the city of Birmingham. Cheaha Mountain, 733 feet high, is Alabama’s highest point. The state has a humid subtropical climate with warm summers and mild winters, with quite a bit of precipitation. The state is prone to extreme weather, especially from tropical storms and hurricanes from the Gulf of Mexico and tornadoes inland in the spring. Around the southern city of Mobile are 70 to 80 days a year with thunderstorms. In summer, the maximum temperature is often 30-33°C throughout the state. In winter, the north is somewhat colder, with highs ranging from around 9°C in Huntsville in January to 16°C in Mobile.

Alabama has traditionally been a less prosperous state, its economy has long been based on agriculture, but this importance has since been marginalized. The US Army is the state’s largest employer, specifically the Redstone Arsenal in Huntsville. Maxwell Air Force Base and the Anniston Army Depot are also major employers. In addition, the government and semi-government are a major employer in the state. Honda, Hyundai, Mercedes-Benz and Toyota have major car plants in Alabama. Tourism is particularly important along the Gulf of Mexico, but Alabama attracts far fewer international tourists than Florida. The low income is offset by the low cost of living, housing in particular is among the cheapest in the United States.

Population of Alabama exploded from 9,000 to 128,000 between 1810 and 1820. Around 1870, the state passed the 1 million inhabitants mark, and between 1900 and 1910 the 2 million inhabitants followed. Growth leveled off from the 1930s onwards, with the state exceeding 3 million inhabitants by 1950 and 4 million by 1990. Alabama has experienced somewhat fluctuating growth since the 1930s, with periods of faster growth interspersed with slower growth. However, the state failed to realize the growth as in Florida and Georgia, for example.

The state has 4 cities with more than 100,000 inhabitants; Birmingham, Montgomery, Mobile and Huntsville. The largest urban area is Birmingham, which has a population of over 1.1 million. Other urban areas have fewer than 500,000 inhabitants. Mobile is pronounced Moh-beel or Mo-biel. See list of cities in Alabama.

Beginning in 1540, the first Spanish expeditions entered what would later become the state of Alabama. However, the area remained uninhabited by Europeans for a long time, the first European city was only founded in 1702 at Mobile. This area was claimed as part of the French La Louisiane between 1702 and 1763. It then became part of British West Florida until 1783, after which the area was divided into American and Spanish parts after the American Revolutionary War. From 1813 the entire area came under American administration. Alabama became a state within the United States in 1817. The state was very sparsely populated at the time. Alabama’s economy from then on was based on cotton plantations, and the population began to grow very rapidly. The state has known various state capitals, Montgomery was Alabama’s capital from 1846. The state was heavily involved in the American Civil War, although there was little fighting in Alabama itself. After 1900, discrimination and racial segregation were strong in the state. Birmingham grew rapidly as it was Alabama’s first industrial center, drawing many migrants from rural areas. During World War II, the industry of the port city of Mobile grew rapidly. In the mid-1960s, most discrimination laws were lifted. Many African-Americans had already left for the industrial cities in the north, so that the population grew little. Alabama was also unable to piggyback on the enormous growth that Atlanta went through from then on. 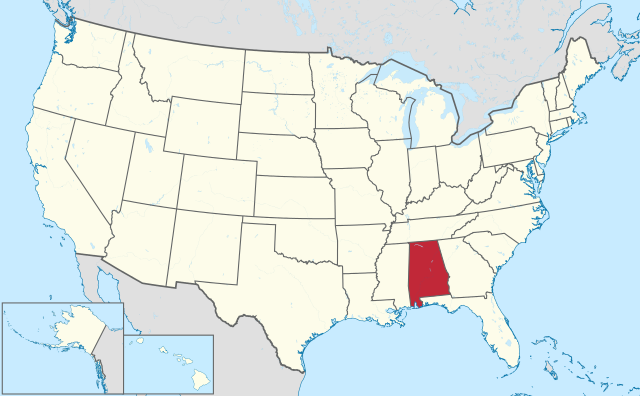