Alaska is a state in the northwestern United States. The state does not border other states of the country and has a population of 733,000 (2021). The capital is the relatively unknown Juneau, the largest city is Anchorage where 40% of the inhabitants of the state live. The state has an area of 1,717,854 square kilometers and is therefore 42 times the size of the Netherlands.

The capital Juneau is located in the southeast of the state and is not accessible by road. The largest city of Anchorage is located on the south side of the state and has a population of 283,000. The agglomeration is even bigger. Another larger town is Fairbanks in the middle of the state. Valdez is a coastal town east of Anchorage. Several places in Alaska are not accessible by road. Juneau seems an illogical state capital, but was the dominant city in Alaska in the early 20th century, only since 1950 is Anchorage bigger than Juneau.

Alaska has a longer coastline than all other US states combined. The state is twice the size of Texas, the second largest state in the country. If it were a country, it would be the 19th largest country in the world. Alaska consists of gigantic nature reserves and has a number of national parks, such as the Misty Fjords National Monument, Admirality Island National Monument, Glacier Bay National Park, Wrangell-St. Elias National Park, Denali National Park, Kobuk Valley National Park and the Gates of the Arctic National Park. Alaska has more than 3 million lakes and is very mountainous. The highest mountain on the North American continent is located in Alaska, the 6,168-meter high Denali (formerly Mount McKinley). Alaska is very cold in the winter. In Utqiagvik (formerly Barrow), Alaska’s northernmost town, the mercury barely rises above 2 degrees in summer. Temperatures below -50 degrees Celsius can occur.

Alaska’s economy is dominated by the oil and gas industry. The energy sector has been the driver of growth in Alaska. The National Petroleum Reserve on the north coast of Alaska contains large reserves of oil and gas. This is mined from Prudhoe Bay. A pipeline runs from there south to Valdez on the south coast, where oil is transferred to oil tankers. Alaska has a relatively high per capita income, but the cost of living is also higher than many states. Due to high transportation costs, food, fuel and consumer products are more expensive than elsewhere in the United States. There is little agriculture in Alaska due to its northern location. Large parts of the state consist of uncultivated wilderness. This also attracts tourists,

Population of Alaska is highly concentrated around Anchorage and to a lesser extent in Fairbanks and Juneau. Fairbanks is the northernmost major city in North America. See list of cities in Alaska. Until World War II, Alaska had a small population, it was not until the 1940s that the state exceeded the 100,000 population mark. The state grew strongly until the 1990s, after which the population growth was somewhat less, but still higher than the American average. It is the most sparsely populated state in the United States. Alaska is home to a relatively large number of Native Americans, who make up almost 15% of the population and form the largest group after whites. The proportion of Asians is also growing, but there are relatively few African Americans and Hispanics.

The first Europeans in Alaska were Russians in the 17th century. At the end of the 18th century, Spain sent out several expeditions to the southern coast of Alaska and established some settlements there. Alaska was largely under Russian rule, but the Russians colonized the area only to a limited extent. The Russian colony was never very profitable. The capital of Russian America was Sitka. In 1867 Alaska was purchased by the United States from the Russians for $7.2 million. At the time, Sitka was the only place with American residents. In the late 1800s, countless Americans moved to Alaska because of the gold rush. In 1912, Alaska was organized as a territory, with Juneau as the capital. In 1942-1943, some islands of the Aleutians were occupied by Japan. Alaska’s population began to grow rapidly during World War II because of its strategic location. It wasn’t until 1959 that Alaska became a state. In 1964 Alaska was hit by the most powerful earthquake in North American history, a magnitude 9.2 earthquake struck the area southeast of Anchorage causing major devastation. In 1968 oil was found at Prudhoe Bay and in 1977 the Trans-Alaska Pipeline to Valdez was completed, making Alaska a major oil producer. Thanks to the oil, Alaska had a structural budget surplus from the 1980s and was able to abolish the income tax. 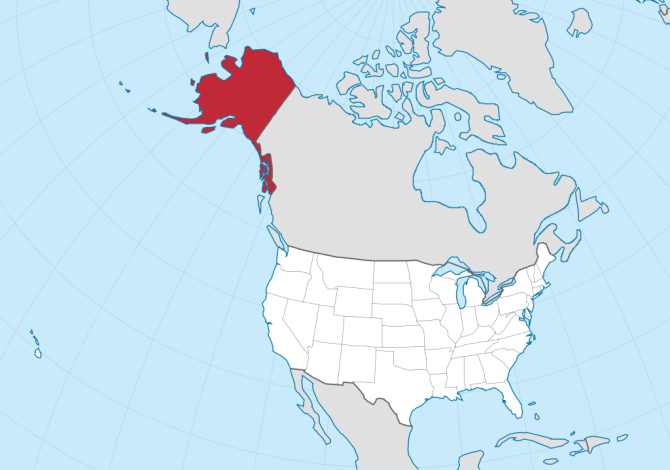