Arizona is a state in the southwestern United States. The state has 7.2 million inhabitants (2021) who mostly live in and around the capital Phoenix. Other major cities include Tucson and Yuma. The state has an area of 295,254 square kilometers, making it 7 times the size of the Netherlands.

Arizona is located in the southwestern United States and borders California, Nevada, Utah, and New Mexico clockwise. It is one of the so-called ‘Four Corner States’, the point where four states meet. As a result, it also borders Colorado. To the south, Arizona borders Mexico, solely by the state of Sonora. Arizona is a large state, it measures 625 kilometers from north to south and 540 kilometers from west to east.

Large parts of Arizona consists of desert, with the Colorado Plateau in the north, in which the Grand Canyon is located. The southern edge of the Colorado Plateau is formed by the Mogollon Rim, a steeply sloping escarpment that turns into ridges south of it. Arizona’s highest mountain is Humphreys Peak at 3,850 feet just north of Flagstaff. In the southeast of the state are isolated mountain ridges, some of which have peaks over 3,000 meters. The southwest of the state is flatter and consists of the Sonoran Desert. This is also the lowest-lying part of the state. Arizona’s western border is largely formed by the Colorado River, which also flows through the Grand Canyon. Other rivers include the Gila River and Salt River. However, there are no rivers in much of Arizona.

Arizona’s economy is primarily services, and mining was also important historically. Tourism plays an important role in Arizona, especially around the Grand Canyon, but also several National Monuments and Native American reservations. Weekend recreation is important for Phoenix residents who want to escape the heat and recreate in the mountains. There are large open mines in various places in Arizona. Phoenix has been an overflow area for California since the 1980s. The houses there are much more affordable than in the Los Angeles area. In addition, many retirees live in Arizona. The transport sector is relatively large. The Nogales border crossing is one of the most important between the United States and Mexico.

Population of Arizona is distributed as followed

Arizona has two major cities, Phoenix and Tucson. Characteristic are the very large suburbs around Phoenix, some of which have more than 200,000 inhabitants. The suburb Mesa has more than 500,000 inhabitants and is the largest suburb in the United States. The Phoenix metropolitan area is growing very fast. Other regional cities include Nogales on the border with Mexico, Yuma to the southwest, Flagstaff and Kingman to the north, and smaller towns like Prescott, Payson, and Globe in the center. See list of cities in Arizona.

The first Europeans in the area were Spaniards in the 16th century. It wasn’t until the 18th century that the first permanent Spanish settlements were established in Arizona. When Mexico Gaining independence from Spain in 1821, the region belonged to Alta California and was under Mexican rule. At the end of the US-Mexican War, Mexico had to cede this area in 1848, and in 1953 the land south of the Gila River was purchased separately from Mexico as the Gadsden Purchase. This established the definitive southern border of the United States. The area was thereafter governed as part of the Territory of New Mexico. Arizona was a Confederate State during the American Civil War, and in 1862 the name “Arizona” was also formally used for the first time. In 1863, the Arizona Territory was separated from New Mexico, forming the basis for the later borders of the state. Pah-Ute County was then part of Arizona, but became part of Nevada in 1867. The city of Las Vegas was later founded here. In 1912, Arizona became the 48th state of the United States, and the last of the 48 contiguous states. The state began to grow rapidly after World War II, particularly around Phoenix. In particular, the availability of air conditioning made life in the state much more bearable in the summer. From the 1970s, Arizona grew rapidly as many people moved from California to Arizona because of much lower house prices. 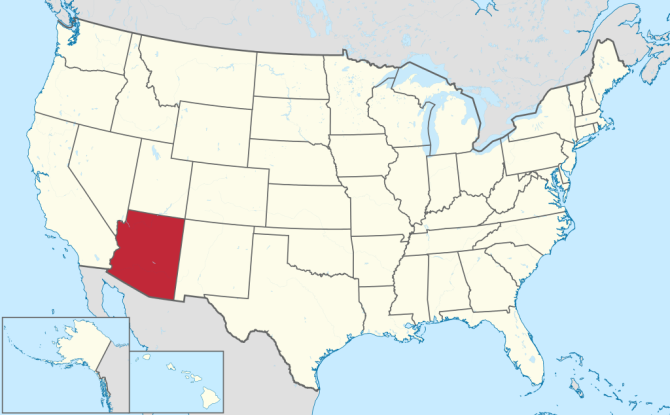