California is a state on the west coast of the United States. California is the most populous state in the country, with 39.2 million inhabitants (2021). The state has an area of more than 420,000 km² and is more than 10 times the size of the Netherlands. The capital is Sacramento, the largest city and metropolitan region is Los Angeles. Another major metropolitan region is the San Francisco Bay Area. California is the best known and most influential state in the United States, economically, politically and culturally.

California generally has straight borders, bordering the Pacific Ocean to the west, Oregon to the north, Nevada and Arizona to the east and the Mexican state of Baja California to the south. The landscape is varied, from rainforests and snowy mountains in the north, to the sweltering deserts in the south. Death Valley is located in California, the lowest point in the United States. California has several ski resorts, right up to the Los Angeles region. The coast is beautiful and fairly unspoilt. To the north is the great conurbation of San Francisco around the San Francisco Bay and a little further inland the capital Sacramento. The south is a gigantic urban area, where the huge conurbations of Los Angeles and San Diego have practically grown together. Half of the population of California lives in the metropolitan area of Los Angeles alone.

The climate in California ranges from Mediterranean and desert to subarctic in the mountains. In the north of the state there is quite a lot of precipitation, but in the south one usually has to make do with irrigation from the Colorado River. Huge amounts of snow can fall in the Sierra Nevada mountain ranges in winter. Temperatures above 50 degrees Celsius occur in Death Valley and the Mojave Desert.

Population of California is distributed as followed.

The metropolitan area of Los Angeles, together with the suburbs in the Inland Empire, has about 18 million inhabitants. The urban area of ​​San Diego has another 3 million inhabitants. East of San Diego is the Imperial Valley and the Coachella Valley, two agricultural areas in the middle of the desert that are irrigated from the Colorado River. The Salton Sea is also located here. These parts are below sea level. In the northeast is the Death Valley, which is the lowest part of the United States. It is also the hottest part of the country at the same time. In contrast to the coastal region, this area is very sparsely populated.

The San Francisco Bay Area encompasses the urbanized region of central California on the Pacific Ocean, which includes San Francisco Bay and San Pablo Bay. This region is urbanized in a different way than Los Angeles, because of the presence of the bays and ridges, the direct coastal region of the Pacific Ocean is hardly urbanized. Most urbanization is along San Francisco Bay, in Silicon Valley, and the valleys east of the East Bay region, which are out-of-the-way suburbs that have edge-city characteristics. Characteristic of the region is the large number of bridges, natural beauty and the more temperate climate compared to Southern California.

The San Joaquin Valley encompasses much of the interior of California, roughly the region between Los Angeles and Sacramento. This is an agricultural area with a series of small and medium-sized towns, Fresno being the largest. The region is less urbanized compared to the megacities of Los Angeles and San Francisco, but has many medium-sized towns, from south to north Bakersfield, Visalia, Fresno, Madera, Merced, Turlock, Modesto and Stockton. Particularly noteworthy is the river delta west of Stockton. The San Joaquin Valley is less developed than the coastal regions. California’s oil industry centers on Bakersfield.

The Sacramento Valley is located north of the San Joaquin Valley and is part of Central California and Northern California. The capital Sacramento is the largest of these. The valley runs north to Red Bluff. In the region are some small towns like Davis, Woodland, Yuba City, Marysville, Oroville and Chico. However, these places are smaller than the towns in the San Joaquin Valley. The region is mainly agricultural in character. There is significant urbanization surrounding Sacramento, particularly towards the Sierra Nevada.

Northern California includes the north of the state and also parts of the Sacramento Valley and the Sierra Nevada. The region is sparsely populated, there are only a few larger towns that can compete with the megacities in the south. Redding, located inland, is an important center. Northern California also includes the Wine Country, where most of California’s wines come from. To the northwest the area is wetter and greener with tropical forests. Striking is the 4,316 meter high Mount Shasta, part of the Cascades and a stratovolcano. The 3,187-meter high Lassen Peak is also a well-known point. Larger towns in the region include Redding, Eureka, Crescent City, Fort Bragg, and Ukiah.

California has the largest economy in the United States, which is logically explained by the fact that it is also by far the largest state in terms of population. If it were a country, California would be the sixth largest economy in the world, comparable to that of France or the United Kingdom. The most important economic sector in terms of number of employees is the public sector, with government and health care as the two largest sectors. The state is known for its media industry, especially the television and film industry, more commonly known as ‘Hollywood’. The tech plays an important role in Silicon Valley, with well-known companies such as Google, Apple, Intel, Cisco, Oracle, eBay and Visa. Prosperity in California is disproportionately concentrated on the coast, especially in the San Francisco Bay Area and along the coast of the Los Angeles region. The interior of California is less prosperous. In fact, California has the highest relative poverty rate in the United States, with 20.6% of residents living below the poverty line in 2016. An important cause of high relative poverty is exorbitant house prices, both along the coast and inland areas. House prices are also significantly above the US average in the cheaper parts of the state. California generally has the highest negative domestic migration rate, with an average of 100,000 more people moving from California to other states per year than the other way around.

The first Europeans to explore the California coast were Spaniards in the 16th century. It wasn’t until two hundred years later that settlements began to be established in California, the most famous of which were the 21 Spanish missions north from San Diego built in 1769-1770. The Spanish army also built forts and pueblos, including Los Angeles and San Jose. In the early 19th century, there were also some Russian settlements along the northern part of the California coast. After the Mexican War of Independence, the area belonged to Mexico from 1821 and was known as Alta California, as opposed to Baja California. From that time on, Americans began to migrate to California from the east. In 1846 a rebellion against Mexico followed and the California Republic was briefly declared. California was occupied by the Americans during the Mexican-American War in 1846-1847. In 1848 the war ended and the United States was assigned the Southwest, which became the US state of California, as well as various territories that would later become states in the area. At the time, California’s population was estimated at only about 8,000 migrants.

This was followed by the California gold rush in which hundreds of thousands of people migrated to the state, mainly Americans and Europeans from the east, but also Chinese from Asia. San Francisco was the dominant city in California at the time and by 1870 already had more than 100,000 inhabitants. Los Angeles would not reach that limit until 30 years later. The historic capital of California was Monterey between 1777 and 1845, followed by Los Angeles until 1849 and various places in the San Francisco region until Sacramento became the final capital from 1854.

In 1869 the first transcontinental railroad was completed as far as California, greatly facilitating transportation from the rest of the United States. The months-long journey by wagon over the various trails to the west were replaced by a number of days by train. Hundreds of thousands of Americans migrated to California, especially after it became known that the state was very suitable for agriculture. The population grew very quickly from 1900 through migration, and from 1965 it was the most populous state in the country. However, the Los Angeles area in particular was very arid, the construction of large canals such as the California Aqueduct and the Los Angeles Aqueduct allowed Southern California to grow enormously. After World War II, California became an important industrial state, with a large aviation sector and manufacturing industry. However, an increasingly unfavorable business climate has meant that these industries have strongly declined in importance. Since the 1990s, structurally more people have moved from California to another state than the other way around, but international migration has ensured that the state continues to grow. After 2000, growth had leveled off to the U.S. average for the first time, and in 2020, a population decline was recorded for the first time in history. [3] 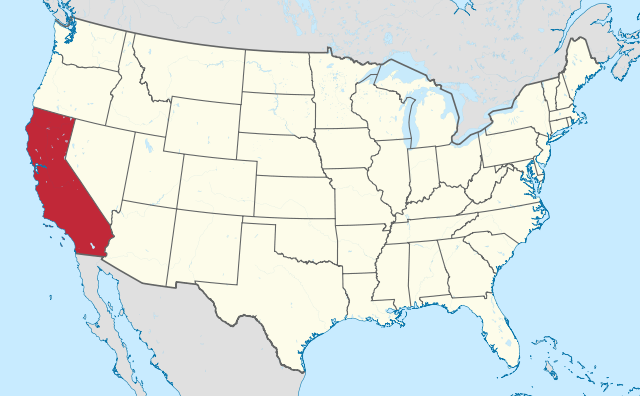