Colorado is a state in the United States, located in the west of the country. The state has 5.8 million inhabitants (2021) and the capital is Denver. The state’s nickname is the Centennial State.

Colorado is located in the western United States, on the transition from the High Plains to the Rocky Mountains. The state clockwise borders Wyoming, Nebraska, Kansas, Oklahoma, New Mexico, Arizona (via the Four Corners), and Utah. The state is square in shape and measures 615 kilometers from west to east and 445 kilometers from north to south.

The state has a diverse landscape. The eastern third is made up of the High Plains, a flat and agricultural area with few elevation changes. In the middle third are the Rocky Mountains with numerous peaks above 4,000 meters. The 4,401 meter high Mount Elbert is the highest mountain in Colorado. The Rocky Mountains are far from the sea and the snow is often powdery. Colorado has no glaciers and no mountains with a significant panorama of eternal snow. Most snow melts in June or July. The Rocky Mountains are comparable in height to the Alps, but the valleys are much higher and therefore mountain passes are much higher. The tree line is significantly higher than in the Alps, usually around 3,200 to 3,500 meters above sea level. The western third of Colorado is part of the desert-like Great Basin with large valleys and mountain ranges. This area is also known as the ‘Western Slope’.

Colorado is often mentioned as a state with a friendly climate for entrepreneurs, it is among the 25% richest states. The tax level is one of the lower in the United States. Traditionally, mining and agriculture have been Colorado’s main economic pillars, but since the 1960s, tourism has become increasingly important, both in winter and summer. The federal government also has an important position in Colorado, as well as several scientific institutions. Boulder in particular is known for this.

Colorado’s major cities are all on the Front Range, where the High Plains abruptly merge into the Rocky Mountains. All cities with more than 100,000 inhabitants are located in this corridor, most of which are suburbs of Denver. Other major cities in the Front Range include Colorado Springs, Fort Collins, and Pueblo. The largest city in western Colorado is Grand Junction. There is only one place with more than 10,000 inhabitants on the High Plains east of Denver (Fort Morgan). See list of cities in Colorado.

The first Europeans in Colorado were Spaniards in the 16th century. However, the area was not colonized for a long time. The United States obtained eastern Colorado through the Louisiana Purchase of 1803. The American claim conflicted with the Spanish colonial empire. In 1819, the United States ceded all land west of the Arkansas River, south of the 42nd parallel, and west of the 100th longitude. Eastern Colorado was originally part of the Missouri Territory. When Missouri became a state in 1821, eastern Colorado was a disorganized territory of the United States. After Mexico ‘s Independence central and western Colorado belonged to that country. The Mexican-American War ensued between 1846 and 1848, after which the United States was assigned northern Mexico, including Colorado. From then on, many migrants headed west to California, preferring the easier northern route through Wyoming. It was not until 1851 that the first permanent Euro-American settlement in Colorado was established, the village of San Luis near the New Mexico border.

Between 1859 and 1861, Colorado belonged to the Utah Territory, Kansas Territory, New Mexico Territory, and Nebraska Territory. However, in 1861, the Colorado Territory was organized. Its boundaries were the same as the present state. The Colorado Territory had few inhabitants at that time, it was largely uncultivated land, where many Native Americans also lived. Colorado became a state on August 1, 1876, 100 years after the declaration of American independence, leading to the nickname ‘The Centennial State’. In that decade the population quadrupled from 40,000 to 194,000 inhabitants. This was partly due to the discovery of silver in Colorado, which led to a brief but intense ‘gold rush’, which put Colorado on the map as a major mining state. In 1930, Colorado crossed the 1 million population barrier for the first time. The Dust Bowl and the economic depression of the 1930s caused a sharp decline in the economy, which was still mainly based on agriculture and raw materials. However, after the Second World War, the state grew rapidly, also due to tourism, from the 1950s the first ski areas were developed. However, a problem in Colorado was transportation, the Rocky Mountains were a formidable obstacle to traffic. The construction of railroads and highways connected western Colorado with the rest of the state. 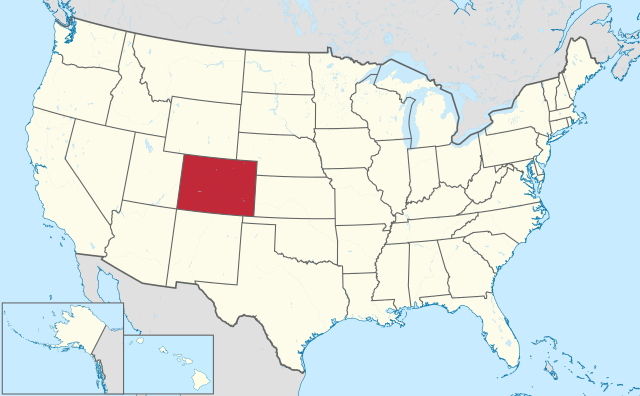