Florida is a state in the southeastern United States. The state has 21.7 million inhabitants (2021) and the capital is Tallahassee. The largest city is Jacksonville, the largest metropolitan area is Miami. The state has an area of 170,304 square kilometers and is therefore more than 4 times the size of the Netherlands.

Florida mainly consists of lowlands, especially on the peninsula there are few places more than 40 meters above sea level. The inland parts of the Florida Panhandle have slightly greater elevation changes, the 105 meter high Britton Hill is the highest point in Florida and the lowest ‘highest point’ of all states. The state is mostly densely forested, with the Everglades, an extensive wetland area to the south. Florida has a coastline with barrier islands, with shallow lagoons behind them. There are several bays, of which the Tampa Bay is the most important. Florida’s rivers mainly flow from the north to the south, with the exception of the slow-flowing St. Johns River that flows north. In the Florida panhandle, the Apalachicola River is the main river. the st.

The state of Florida is known as the ‘Sunshine State’ but often has to deal with extreme weather. The southernmost part of Florida has a tropical climate, the only part of the mainland United States with such a climate. North of Lake Okeechobee there is a subtropical climate. Maximum temperatures in Miami range from 25°C in January to 33°C in summer. The winters are less warm in the north, in Tallahassee the average maximum temperature in January is 18°C. Frost occurs occasionally in northern and sometimes central Florida, snowfall is very rare and almost never lasts more than a day. Characteristic for Florida is the large amount of precipitation, in both the north and south there is an average of more than 1,500 mm of precipitation per year. Thunderstorms are frequent in summer, sometimes with hail and tornadoes. There are many waterspouts along the coast. The state of Florida is prone to hurricanes because of its location surrounded by warm seawater. Hurricanes can come from both the Gulf of Mexico and the Atlantic Ocean.

Florida has a developed economy, mainly focused on services, commerce and transportation. There is relatively little heavy industry in Florida. Miami is a major financial center for trade with Latin America and the Caribbean. Agriculture still takes place inland, especially tropical fruits. The construction industry is of great importance in Florida due to its rapidly growing population. The state is one of the top tourist destinations in the United States. Tourists flock to Florida for its beaches, especially on the east coast, and the warm climate in winter. An important source of income in the winter are the so-called ‘snowbirds’, wealthy elderly people from the northeastern United States and Canada. who reside in Florida during the winter. In addition, there is massive domestic migration to Florida, particularly among seniors. In Florida, many gated communities are exclusively for residents of 50+. Especially from the New York region there is a large domestic migration to Florida. [3]

Florida is also known for Cape Canaveral, the center of American space travel, located on the east coast, and Disney World in Orlando, one of the main attractions in the United States, which attracts more than 50 million visitors annually. Also known is the Daytona 500, a NASCAR race in Daytona Beach that is held every year.

The state was relatively hard hit by the financial crisis from 2008. Traditionally much has been built on speculation in Florida and the cities in Florida had a lot of risky mortgage loans, especially around Orlando the ‘foreclosure rate’ was very high, but the state recovered strongly from 2012.

Population of Florida is growing rapidly, and the state has been one of the fastest growing in the United States for decades. It was not until the 1920s that Florida crossed the 1 million population barrier, followed by the 2 million population barrier in the 1940s. Hundreds of airports and air strips were built in Florida during World War II because of its strategic location. This resulted in rapid population growth. However, the rise of air conditioning caused a huge population growth from the 1950s onwards, the state crossed the line of 5 million inhabitants in the 1960s and 10 million inhabitants in the 1980s. This then doubled to more than 20 million inhabitants in 2015. In 2020, it became the third largest state in the country.

Florida has four major metropolitan areas. The capital, Tallahassee, is a relatively small college town in the interior of the Florida Panhandle. The largest city is Jacksonville, located in the northeast, the largest conurbation is Miami, an urban region also known as ‘South Florida’. The metropolitan area of Tampa is located on the west coast and is the second largest metropolitan region after Miami. The only major inland city is Orlando. In the west of the Florida Panhandle, the city of Pensacola is still significant. See list of cities in Florida.

Florida is experiencing very large-scale suburbanization, especially in the coastal regions and the inland region around Orlando. However, Florida is also a state of contrasts, there are also plenty of sparsely populated areas and wilderness scattered throughout the state, both in South Florida and the Florida Panhandle. Also, the coast is far from urbanized everywhere, especially the long coastal area from Panama City to near Tampa is virtually undeveloped with only a few isolated coastal towns. Besides the Everglades, much of the interior of South Florida is sparsely populated.

The state is home to a large community of Cuban-Americans who fled to nearby Florida after the revolution. Also, there are many migrants of Hispanic and Caribbean background. Asians are a small but growing group in the state. Florida is one of the most Spanish-speaking states in the country, with 20 percent of the inhabitants having Spanish as their mother tongue.

Juan Ponce de León was a Spanish conquistador who first made contact with ‘La Florida’ in 1513. It became a state in 1845. However, the state was sparsely populated and agricultural in character for a long time. The Florida peninsula was barely developed before the 20th century, what are large cities today were just villages in 1900. For this reason Florida is culturally divided into two regions, the north of Florida culturally belongs to the ‘Deep South’ region and has many similarities with the rural areas of Georgia and Alabama. The peninsula was only later populated and consists of a great melting pot of people from all parts of the country and immigrants from mainly Latin America.

The ‘Florida land boom’ followed in the 1920s, with huge swathes of the state being sold to property developers. Entire new cities were built and large tracts of land were cleared for housing, which, however, turned out not to be in such a demand. The bubble burst in 1925. Remnants of never-built cities can still be seen in the landscape in the form of networks of dirt roads that only open up forest areas.

Until the mid-20th century, Florida was the least populous of the southern states, especially the south was sparsely populated. In 1900, the region that now forms the Miami metropolitan area had only about 10,000 inhabitants. However, from the 1950s, Florida started to become attractive due to its low cost of living and the increasing use of air conditioning. The population started to grow strongly in the 1960s due to a migration from the Rust Belt and later by seniors from the northeastern United States, especially from the New York City region., who sold their homes there for huge profits and then lived a life of luxury in Florida. The most famous retirement community is The Villages, which has been described several times as the fastest-growing place in the United States, from 8,000 inhabitants in 2000 to approximately 120,000 inhabitants in 2015. 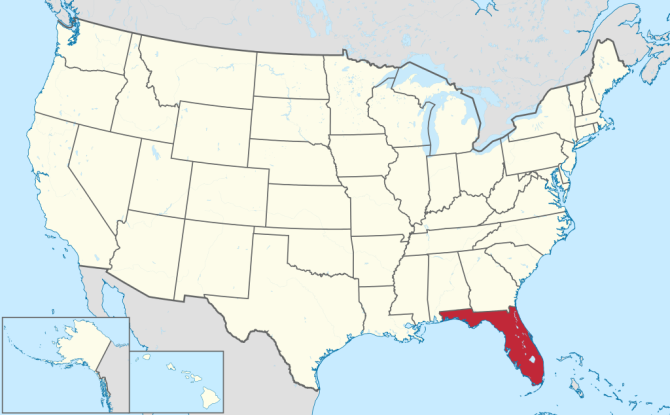