Not to be confused with country, Georgia.

Georgia is a state in the southeastern United States. The state’s nickname is the Peach State. Georgia has 10.8 million inhabitants (2021). The capital and largest city is Atlanta.

Georgia is located in the southeastern United States, on the Atlantic Ocean. The state borders Florida, Alabama, Tennessee, North Carolina, and South Carolina. The state measures a maximum of 520 kilometers from north to south and 400 kilometers from west to east. The state has the largest land area of any state east of the Mississippi River.

The state is mostly flat to rolling, with low mountains only in the north. The 1,458-foot Brasstown Bald is the highest point in the state. Georgia is mostly heavily forested, only a 100 to 150 km wide strip through the south and east of the state has more open areas. Few major rivers flow through the state, the most important being the Savannah River, which forms the border with South Carolina, and the Chattahoochee River, which flows through Atlanta. The Savannah River has several large reservoirs. Elsewhere in the northern half of the state are several reservoirs. The Georgia coast is mostly inaccessible and consists of wetlands and swamps. There is relatively little sandy beach, except at Tybee Island.

Georgia has a humid subtropical climate with high rainfall. The state has short mild winters and long hot summers. The average maximum temperature in Atlanta is 11°C in winter and 32°C in summer. The state is prone to extreme weather, especially flooding, tornadoes and the impact of hurricanes.

Georgia’s economy is dominated by the Atlanta metropolitan area. This is by far the largest metropolitan area in Georgia. The city of Savannah has the largest port in the southeastern United States. Georgia is one of the less affluent states, but the lower income is offset by the low cost of living, which is one of the lowest in the United States. Atlanta is often seen as the most affordable major city. Well-known companies headquartered in Georgia include Home Depot, UPS, Coca-Cola, and Delta Air Lines. Hartsfield-Jackson Atlanta International Airport is the busiest airport in the world by passenger volume. Georgia has relatively little heavy industry, with mostly manufacturing around Atlanta.

Georgia is one of the fastest growing states in the southern United States. Already before 1860 the limit of 1 million inhabitants was exceeded, followed by the limit of 2 million around 1895. In the 1920s and 1930s the population of Georgia barely grew, but then started to accelerate, mainly due to the growth of the Atlanta region. In the 1970s, the 5 million population mark was crossed, doubling to more than 10 million in 2015. Georgia is therefore becoming an increasingly dominant state within the entire US.

The Atlanta metropolitan area dominates Georgia, about 60% of all Georgians live in and around Atlanta. Other urban areas are a lot smaller, such as Columbus, Augusta, Macon and Savannah. In 2014, the city of Macon merged with the surrounding county, instantly increasing Macon’s official population by 65%, making Macon Georgia’s fourth largest city. See list of cities in Georgia.

Georgia has the most counties in the United States after Texas, so that the state is politically fragmented. This is particularly a problem in the Atlanta area, where there are many conflicting interests between counties and weak regional government.

In 1733, the British colony of Georgia was founded, named after King George II. There was a plan to develop the colony on a large scale. Despite its close ties to the British Crown, it was one of the first colonies to rebel against British rule, becoming the 4th state of the United States in 1788. Georgia was an important battleground during the American Civil War. Numerous battles were fought in Georgia and the state was largely destroyed. In 1870, Georgia was the last Confederate state to rejoin the Union. After the Civil War, Georgia’s infrastructure had to be rebuilt. The population of the state grew fairly quickly at first, but after 1920 it almost came to a standstill. It was not until 1940 that the population started to grow strongly again, Georgia’s post-war growth is largely attributable to the Atlanta metropolitan area, some of which counties were among the fastest-growing in the United States for some time. For example, Gwinnett County near Atlanta grew from 72,000 in 1970 to 878,000 in 2014. Throughout history, Georgia’s importance within the United States has remained relatively stable, fluctuating between the 9th and 16th largest states in terms of population. The state temporarily lost importance in the early 20th century as other states grew faster, but in the second half of the 20th century Georgia grew above average again. 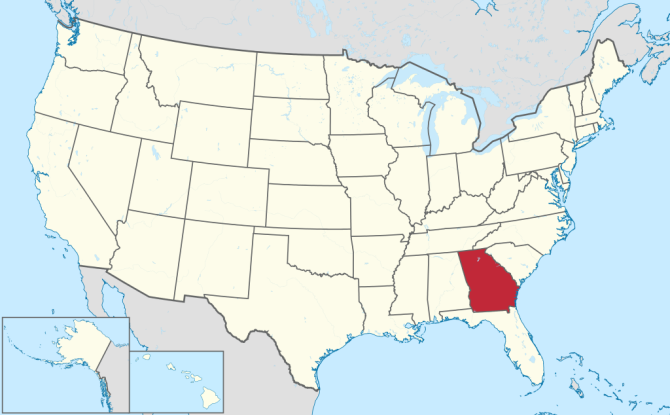