Indiana is a state in the United States. The state is located in the Midwest of the country, and its capital is Indianapolis. The state has an area of 94,321 square kilometers, and is more than twice the size of the Netherlands. The state has 6.8 million inhabitants (2021).

Indiana is located in the Midwestern United States, on Lake Michigan. The state borders Michigan, Ohio, Kentucky, and Illinois clockwise. Indiana measures a maximum of 440 kilometers from north to south and 150 miles from west to east. Large parts of Indiana are fairly flat and consist of cultivated prairies. The southern half of the state has more forest and low hills. The Ohio River is the main river in Indiana, which forms the southern border. Other rivers are small, only the Wabash River in the southwest has some size. The 383-foot Hoosier Hill is the highest point in Indiana. The state has a humid continental climate with cold winters and warm summers. The average maximum temperature in Indianapolis is 2°C in winter and 29°C in summer.

Indiana is an important state in manufacturing and agriculture. Northwest Indiana has a lot of heavy industry, especially around Gary. Indiana, however, has been less affected by the decline of heavy industry than other states, making it less of a Rust Belt state than its neighboring states. However, some places around Gary are very shabby. Indiana has a more attractive investment climate than most neighboring states. Electricity is mainly produced by coal-fired power stations, including the largest coal-fired power station in the United States.

Population of Indiana grew rapidly in the early 1800s as the land developed as a productive agricultural land. Between 1810 and 1850 the population grew from 24,000 to 988,000 inhabitants. However, the state’s growth in the 20th century was less strong than some other states, peaking in the 1940s and 1950s. The state is often growing somewhat below the American average. Since 1990, the state’s growth has mainly been concentrated around the capital Indianapolis.

The largest city is the state capital Indianapolis, which has several larger suburbs. The region around Gary in the state’s northwest are actually suburbs of Chicago. To the north of the state are South Bend and Fort Wayne, to the south Evansville and some suburbs of Louisville, Kentucky. See list of cities in Indiana.  In addition, Indiana has a relatively densely populated countryside, the villages are never too far from each other. There are numerous small regional towns scattered throughout the state.

The first Europeans in Indiana were French from Canada in the 17th century. From 1787 the area belonged to the Northwest Territory, Indiana was then still hardly mined territory. In 1800, Ohio was separated from the Northwest Territory, and the rest was called the Indiana Territory, which also included Michigan, Illinois, Wisconsin, and northeastern Minnesota. Vincennes was the capital of the Indiana Territory. In 1816 Indiana became the 19th state of the United States. Indianapolis has been the capital since 1825.

From the early 20th century, Indiana began to industrialize, especially in the north of the state. The Gary Works, for a long time the world’s largest steel mill, was built between 1906 and 1908. Heavy industry began to shrink from the 1970s onwards. After the Second World War, the manufacturing industry began to grow. Deindustrialization began to reverse from the 1980s, making Indiana one of the more successful states in the Rust Belt. 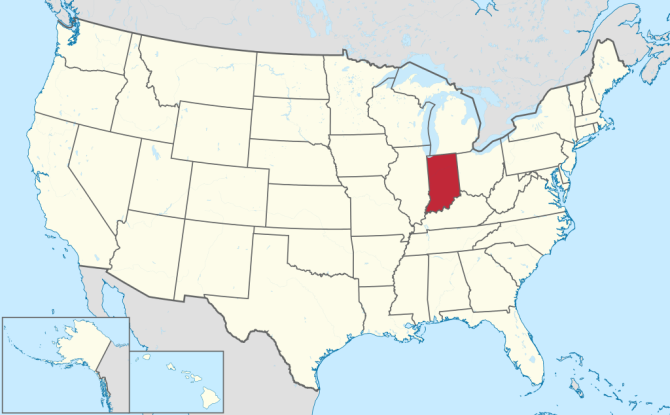