Kansas (pronunciation: kænzəs) is a state in the Midwestern United States. The state has 2.9 million inhabitants (2021) and the capital is Topeka. The largest city is Wichita, but the largest conurbation is Kansas City. The state has an area of ​​213,096 square kilometers and is therefore more than 5 times the size of the Netherlands.

Kansas is located in the heart of the United States and borders Nebraska, Missouri, Oklahoma, and Colorado clockwise. The state measures 650 kilometers from west to east and 335 kilometers from north to south. The shape of Kansas is largely a rectangle, only the northeast boundary is not straight because it is formed by the Missouri River. This is also the largest river in the state. Other larger rivers are the Arkansas River and Kansas River. Kansas is mostly flat prairies, but it also has some low hills, most notably the Flint Hills in the east of the state. Large parts of western Kansas are nearly treeless.

Kansas falls under three climatic zones, a humid continental climate in the north and center, a humid subtropical climate in the southeast and a cold steppe climate in the west. Precipitation increases from west to east. The average maximum temperature in Topeka is 4°C in winter and 32°C in summer. Kansas is prone to extreme weather, especially severe thunderstorms with tornadoes in the spring and summer. Blizzards can occur in winter.

Kansas is known as an agricultural state, which geographically dominates the state, agricultural areas can be found in all parts of Kansas, with much circular irrigation in the drier center and west of the state. Most people work in the service sector and industry. Wichita is home to a lot of aviation industry, which has earned the city the nickname ‘The Air Capital of the World’. The Kansas City metropolitan area dominates the state economically, although only part of the urban area is in Kansas. The west of the state is rural in character. Kansas oil and gas are mined, but production has declined since the 1980s.

Population of Kansas grew rapidly in the second half of the 19th century, from 107,000 in 1860 to 1.4 million in 1890. Kansas was particularly hard hit by the economic depression and the Dust Bowl in the 1930s. was also a decade in which the population shrank. The population grew most rapidly in the 1950s, but Kansas has since had a moderate population growth rate below the US average. Population growth is occurring exclusively in the larger cities, especially around Kansas City, where the Overland Park suburb is larger than the central city of Kansas City, Kansas. Western Kansas is very sparsely populated with few larger towns. See list of cities in Kansas.

Characteristic of Kansas is the population decline in the countryside. In many rural counties the highest population was reached in the period 1890-1910, after which a contraction set in. This was due to mechanization in agriculture, which meant that fewer workers were needed. The decline started well before the Dust Bowl in the 1930s. West of US 81 are 62 counties, a large part of which have lost between 50 and 80% of the population from their peak around 1900. The only counties where the population did not shrink are the counties with a larger place that has a regional function. Also, the counties that had a population of less than 4,000 in 1900 did not shrink much because a basic demand for labor remained here despite the mechanization of agriculture. By 1900 the rural counties in the north of western Kansas had a significantly larger population than the rural counties in the south of western Kansas. The contraction was therefore greatest in northwest Kansas, because there was a greater surplus of workers here than in the southwest of the state, which had fewer inhabitants at the time.

The first Europeans in Kansas were Spaniards in 1541. The area was little colonized until the 19th century. In 1803, Kansas was largely purchased by the United States from France as part of the Louisiana Purchase. However, French influence in Kansas was small, as can be seen in the few places in the state with French names, in stark contrast to neighboring Missouri. Fort Leavenworth was the first permanent American settlement in Kansas in 1827. Southwestern Kansas belonged to Spain until 1821 and then to Mexico for some time After the US-Mexican War of 1846-1848, the area came under US administration. In 1854 the Kansas Territory was organized, encompassing the present state and the area west of it to the Continental Divide in the Rocky Mountains, eastern Colorado. Kansas became the 34th state in 1861. After that, Kansas was the center of the ‘wild west’ for a while as the western border of the United States gradually moved westward. Kansas was west of that for a long time. Especially Dodge City was known for this. Kansas was mainly cultivated in the late 1800s and early 1900s through agriculture. 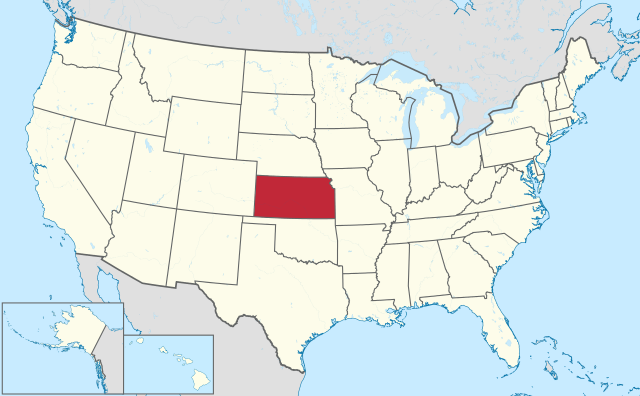