Maryland is a state in the United States. The state is located in the northeast of the country on the Atlantic Ocean and has 6.1 million inhabitants (2021) on 32,133 square kilometers, the same size as the land area of the Netherlands. The capital is Annapolis, the largest city is Baltimore.

I-68 through Sideling Hill.

Maryland is one of the Mid-Atlantic states and is located on the Atlantic Ocean. An important feature of the state is the Chesapeake Bay which consists of the confluence of several estuaries. The state borders Pennsylvania, Delaware, Virginia, and West Virginia. The District of Columbia ( Washington, D.C. ) is located on the Virginia border. To the east is the Delmarva Peninsula, a large peninsula that also includes parts of Delaware and Virginia, after which the peninsula is named. Central Maryland is highly urbanized, the west is more sparsely populated and mountainous. The 1,024-meter Hoye-Crest is the highest point in the state. Major rivers in Maryland include the Potomac River on the Virginia border and the Susquehanna River in the northeast. The state has a predominantly humid continental climate, with the southeast being warmer than the west. In the western mountains there are ski areas and snow falls frequently. Snow is less frequent in the lower-lying areas in the east of the state. The average maximum temperature in Annapolis is 6°C in winter and 30°C in summer.

Maryland’s economy is heavily dependent on the government, many residents work in Washington, D.C. In addition, there are many large government agencies in the state, especially many defense and aviation are located in the metropolitan area between Washington and Baltimore. The National Security Agency is headquartered in Fort Meade just outside Baltimore, and Annapolis is the location of the Naval Academy. There is also a lot of diverse manufacturing industry in the state. Tourism is mainly important along the coast and in the west of the state. Maryland is considered the most prosperous state in the country.

Maryland has a diverse population. The African Americans in the state are among the wealthiest in the country, mainly due to federal government employment in Washington, D.C. The only major city in Maryland itself is Baltimore, the top 10 largest cities are otherwise just suburbs. between Washington and Baltimore and often have the status of a census-designated place rather than an actual municipality. Annapolis is a small state capital with only 39,000 inhabitants. See list of cities in Maryland.  Population of Maryland did not grow as quickly as many other states in the 19th century, it was mainly from the early 20th century that the federal government was a major employer and Maryland began to grow strongly. In 1890 the limit of 1 million inhabitants was crossed, and the limit of 2 million inhabitants was crossed in the 1940s. That doubled to 4 million inhabitants in the 1970s and has continued to show strong growth in recent years.

The first Europeans established settlements in the area in the 17th century. The area is named after Henrietta Maria of France, wife of King Charles I. The boundary between Pennsylvania, Delaware, and Maryland was definitively established in 1760 and is known as the Mason-Dixon Line. Maryland was one of thirteen colonies that rebelled against British rule. In 1788 Maryland became the 7th state of the United States. In 1790, the state donated a tract of land on the Potomac River to the federal government so that the District of Columbia could be created, the site of the US capital of Washington. Maryland’s population was relatively small until the late 1800s, with many residents living in rural areas. Cumberland was the second largest city in the state at the time, after Baltimore. The city of Baltimore developed as one of the most important ports on the East Coast. The state rapidly suburbanized from the 1950s onwards. Baltimore experienced a long-term economic downturn due to the contraction of heavy industry from the 1960s onwards. 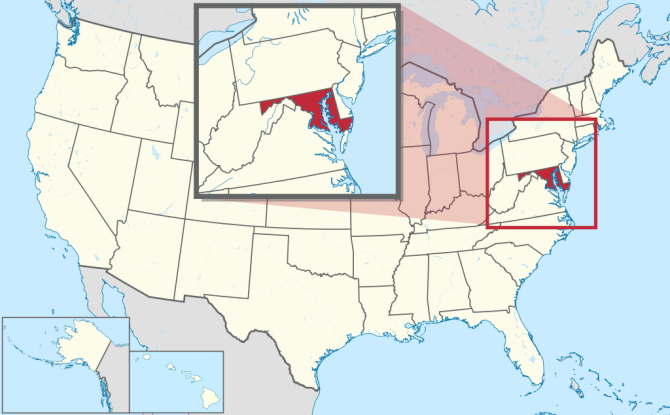