Massachusetts is a state in the northeastern United States. The state has 6.9 million inhabitants (2021) and the capital and largest city is Boston. The state has an area of 27,336 square kilometers and is therefore the size of two thirds of the Netherlands.

Massachusetts is located in the New England region and is located on the Atlantic Ocean. The state borders New Hampshire, Vermont, New York, Connecticut, and Rhode Island. The state measures a maximum of 300 kilometers from west to east and 175 kilometers from north to south. An important geographical feature of Massachusetts is Cape Cod, an elongated peninsula in the ocean. In addition to numerous small islands, the state also includes two larger islands, Martha’s Vineyard and Nantucket Island. The state has three major bays, Massachusetts Bay, Cape Cod Bay and Buzzards Bay. To the south is also Nantucket Sound.

The state is flat to slightly hilly and predominantly densely forested. The eastern half of the state is highly urbanized, the west is somewhat less developed but still has many regional cities. Major rivers include the Merrimack River to the northeast and the Connecticut River to the west. There are numerous small reservoirs, the Quabbin Reservoir being the largest.

Massachusetts has two main climatic zones, a humid continental climate in the interior and a humid subtropical climate in the east. The average maximum temperature in Boston ranges from 2°C in winter to 27°C in summer. Huge blizzards can occur in winter. The state is prone to storms and hurricanes from the Atlantic Ocean, although tropical cyclones rarely landfall in the state.

Massachusetts is one of the most prosperous states in the country, with a service-oriented economy. The tech industry is a major employer, as are government and education. Tourism is an important pillar in the smaller towns, especially along the coast. Cape Cod is a popular weekend destination from Boston. The state has a high tax level by American standards and a somewhat unfavorable business climate.

Population of Massachusetts passed the 1 million mark shortly after 1850. The state then grew rapidly to 5.7 million inhabitants in 1970, but growth leveled off significantly thereafter. Massachusetts has slightly fewer African Americans than many other states in the Northeast. However, there are relatively many Asians and Hispanics. However, almost three quarters of the inhabitants are still white.

In 1620, the first English colony in Massachusetts was founded in Plymouth. This was the second permanent colony of the English in the United States. Boston was founded in 1630. The state became the center of the American independence movement. The American Revolution began in Massachusetts, and in 1788 it became the sixth state of the United States. Originally Maine. belonged also to Massachusetts, this seceded in 1820 as the 23rd state. In the 19th century, the state became a leader of the American Industrial Revolution, with the first factories in Lowell and Boston. However, in the early 20th century, Massachusetts’ industrial base began to erode due to competition from the southern and midwestern United States. The economy was successfully reoriented towards high tech, especially around the Boston ring road. In 1987, the state received federal funding to bring Boston’s Central Artery (I-93) underground, which became the most expensive road project ever in the United States, and is also known as the “Big Dig.” 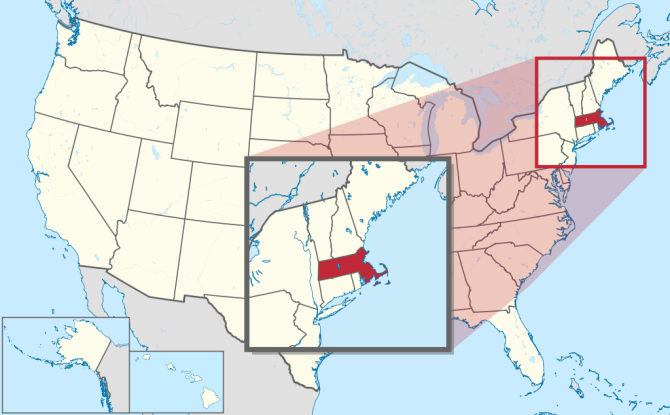