Minnesota is a state in the northern United States , located in the Great Lakes and Midwest regions. Minnesota has 5.7 million inhabitants (2021) and has an area of 225,365 km², making it almost six times the size of the Netherlands. The capital is St. Paul, the largest city is Minneapolis, which together form the Twin Cities metropolitan area.

Minnesota belongs to both the Great Lakes and Midwest regions. The state is located on Lake Superior and is bordered by Wisconsin to the east, Iowa to the south, and South Dakota and North Dakota to the west. To the north, Minnesota borders Canada, the provinces of Manitoba and Ontario. The state measures a maximum of 650 kilometers from north to south and a maximum of 570 kilometers from west to east. A special part of Minnesota is the Northwest Angle, an area north of the Lake of The Woods that lies above the 49th parallel north, and can only be reached by land via Canada.

The state has two dominant landscapes, the flat prairies in the south and west and the forests and hills in the vast northeast of the state. The Iron Range is located in northern Minnesota, home to the 701-foot-tall Eagle Mountain, Minnesota’s highest point. Minnesota has several larger lakes, including the huge Lake Superior, and the Lake of the Woods to the north. The Ontario border is formed by a chain of large lakes. To the north is also the Lower and Upper Red Lake.

The major rivers are the Mississippi River, the St. Croix River, and the Red River. What is special is that the water in Minnesota flows to the Gulf of Mexico, the Atlantic Ocean and Hudson Bay. Minnesota’s nickname is The Land of 10,000 Lakes, there are 11,842 lakes larger than 4 acres, and lakes occur in the north and east as well as on the prairies.

Minnesota has a continental climate with cold winters and warm summers. The average maximum temperature in Minneapolis ranges from -4°C in the winter to 28°C in the summer. In winter temperatures down to -30°C are no exception. Extreme weather is a regular occurrence, with blizzards in the winter and severe thunderstorms with tornadoes in the summer, particularly in the southern half of the state. The frequency of tornadoes is lower than in states further south. Precipitation ranges from 500 to 900 mm per year, making parts of Minnesota relatively dry.

Minnesota’s economy is viewed as a reflection of the US average, which is dominated by the urban economy of the Twin Cities, as well as agriculture in the south and west, and commodities (particularly coal and ore) in the north. The income level in Minnesota is often among the 25% highest of all US states. Mining mainly takes place in the Iron Range in the northeast of the state. Tourism is also the most important sector in this region, with lakes, forests and rivers. There are also ski areas in this area.

Population of Minnesota crossed the 1 million mark between 1880 and 1890 and the 2 million mark by 1910. Growth then leveled off and was mainly concentrated in the Twin Cities region. In the 1950s, the 3 million mark was crossed, followed by the 4 million mark around 1980 and 5 million just after 2000. Minnesota’s growth is around the US average, and has fluctuated somewhat since World War II. The biggest drawback to inland migration to Minnesota is the very cold winters.

Minnesota’s two largest cities are Minneapolis and St. Paul, the centers of which are 14 kilometers apart and together form the large conurbation of Twin Cities. With a population of 3.5 million, it is the second largest metropolitan region in the Midwest after Chicago. The only other city with more than 100,000 inhabitants is Rochester. Other larger cities that are not suburbs of the Twin Cities are Duluth to the northeast, St. Cloud to the west, and Mankato to the south. Of the 20 largest cities, only three are not suburbs of the Twin Cities. See list of cities in Minnesota.

The first Europeans were French fur traders in the 17th century who traveled across North America from French Canada. Between 1762 and 1802 the area was part of Spanish Louisiana. The land east of the Mississippi River became part of the United States after the Revolutionary War in 1783, the part west of the Mississippi River was purchased from France in 1802 as part of the Louisiana Purchase, virtually reducing the area of the United States. doubled. Beginning in 1819, Fort Snelling was built at the confluence of the Mississippi and Minnesota Rivers. From 1839, the city of St. Paul began to emerge near Fort Snelling. In 1849, the Minnesota Territory was organized, covering all of the land east of the Missouri River in what would later become North and South Dakota. In 1850 Minnesota had more than 6,000 inhabitants. In 1858 it became the 32nd state in the United States. Minnesota was thereafter rapidly populated by agricultural and forestry development. Minneapolis grew as the starting point of the Mississippi River forestry industry. The riverside location was ideal for transport south. Commodities were an important pillar of the economy in the early 20th century, with Duluth developing as a port for the transfer of ore, which was transported by ship across the Great Lakes to the industrial towns. Minneapolis has always been the largest city in Minnesota. The population peaked at 522,000 in 1950, but then began to decline for a long time, to a low of 368,000 in 1990. Since then, the population has been growing again. St. Paul has declined to a lesser extent. 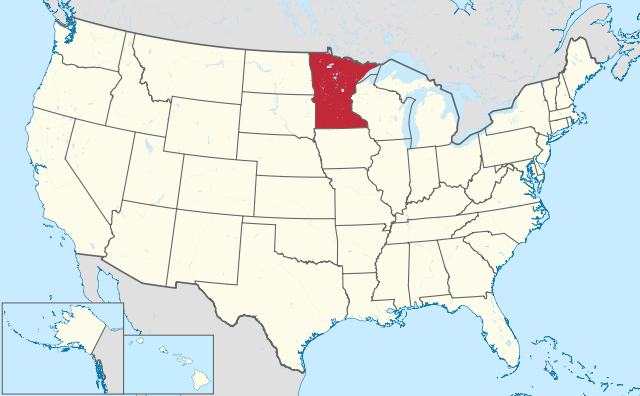