Missouri is a state in the Midwestern United States. The state has 6.1 million inhabitants (2021) and the capital is Jefferson City. The largest city is Kansas City and the largest conurbation is St. Louis. The state has an area of 180,533 square kilometers and is almost 5 times the size of the Netherlands.

Missouri is located in the Midwest and on the Great Plains but has a different geography, the southern half being much more forested and hillier with the Ozark Mountains than other Midwestern states. Missouri clockwise borders Iowa, Illinois, Kentucky, Tennessee, Arkansas, Oklahoma, Kansas, and Nebraska. Missouri, along with neighboring Tennessee, has the most borders of all states, at eight. The two largest rivers are the Mississippi River, which forms the eastern border of the state, and the Missouri River, which forms part of the western border and then flows right through the center of the state. Missouri’s two largest cities, St. Louis and Kansas City, as well as the capital Jefferson City are located on the Missouri River. The state is named after the river.

The state has a densely forested and hilly south, although the southeasternmost part, called the Missouri Bootheel because of its shape, consists of prairies. The north of the state is flat and less forested, with vast prairies. The highest point in Missouri is the 540-foot Taum Sauk Mountain in the southeastern part of the state. Several reservoirs are located in southern and central Missouri.

Missouri has a humid continental climate, with cold and snowy winters and warm and humid summers. The southeast has a subtropical climate. The average maximum temperature in Jefferson City ranges from 4°C in winter to 31°C in summer. Missouri is located on the east side of Tornado Alley, tornadoes occur with some regularity, including in the Ozark Mountains. In 2011, a large tornado destroyed a third of the city of Joplin, killing 160.

Missouri has a median income that is slightly below the US average, although there are an equal number of higher and lower income states than Missouri. However, the cost of living is low. Industry is mainly found in the Kansas City and St. Louis regions, although there is relatively little heavy industry. Missouri is a major agricultural state and has the second largest number of farms in the United States after Texas. There is some mining in the east of the state. Missouri is a major transit state for transportation, especially for east-west traffic.

The city of St. Louis has experienced a sharp decline in population, shrinking from 857,000 in 1950 to 319,000 in 2010. However, the urban area of St. Louis grew rapidly, and was considered much more attractive than the Illinois side. Kansas City has also seen population fluctuations but, unlike St. Louis, has not seen a long contraction. See list of cities in Missouri.

The first Europeans in Missouri were French Canadians. In 1735, Ste. Founded Genevieve, the first European settlement west of the Mississippi River in Missouri. St. Louis was founded in 1764 by Frenchmen from New Orleans. From then on, however, the area was under Spanish rule, which was purchased by the United States from France in 1803 as part of the Louisiana Purchase. Missouri has traditionally been the gateway to the western United States. Initially this was the city of St. Louis, later it became Kansas City. The Lewis & Clark expedition started in 1804 in St. Charles. In 1811-1812, a series of powerful earthquakes occurred around New Madrid, measuring up to 8.0. Such a powerful earthquake is still a concern in the region today. At the time, the impact was minor because few people lived there. Missouri was the starting point of routes westward in the 1800s, such as the legendary Pony Express, the Oregon Trail for migrants heading west, and the Santa Fe Trail.

Missouri was largely spared the violence of the American Civil War, although there was a guerrilla war and a number of incidents. At the end of the 19th century, Kansas City became one of the most important American cities, mainly as a trading center for the meat industry. Livestock was taken to railroads in Texas and Kansas and then processed into products in Kansas City. From the 1950s, employment in the railways and industry declined sharply, and the state had to reorient itself economically. In 1958, the United States’ first Interstate Highway was claimed to have opened at St. Charles. With the construction of I-70 in particular, Missouri became a major transit state, with two major cities at the ends of the highway in Missouri, St. Louis and Kansas City. 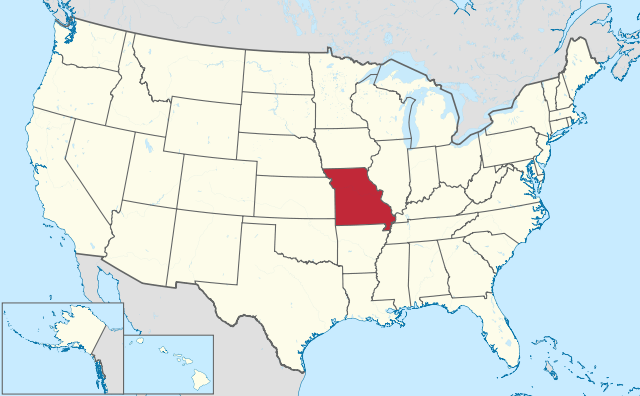