Montana is a state in the northern United States. The state has 1.1 million inhabitants (2021), and the capital is Helena. The largest city is Billings. See list of cities in Montana.  It is the fourth largest state in area and is approximately 10 times the size of the Netherlands.

Montana is located in the northern United States, on the border with Canada. It borders the Canadian provinces of British Columbia, Alberta, and Saskatchewan. It also borders the US states of North Dakota, South Dakota, Wyoming, and Idaho. Montana is a large state with an area of 381,156 km², ten times the size of the Netherlands. It measures up to 900 kilometers from west to east and 500 kilometers from north to south. Much of the state falls under the High Plains, a sparsely populated steppe with some isolated mountain ranges in the center of the state. The west is part of the Rocky Mountains and has several mountain ranges, including the Bitterroot Range on the border with Idaho. Well known is Glacier National Park in the northwest of the state, the only part of the American Rocky Mountains with glaciers. The 3,904 m high Granite Peak is the highest point in the state. Yellowstone National Park is also partly located in Montana.

The mountains are the best-known part of Montana, but large parts of the state are actually flat. Afforestation is mainly found in the west of the state, the east consists of barren steppe. Major rivers in the state include the Missouri River and the Yellowstone River, which converge just over the border in North Dakota. A large reservoir in the Missouri River is Fort Peck Lake in the northeast of the state. Elsewhere are several smaller reservoirs, most notably in the Kootenai River in the far northwest of the state. Flathead Lake is the largest natural lake.

The state has a predominantly arid continental climate, with some variation according to altitude. The average maximum temperature in Billings is 2°C in winter and 30°C in summer. Precipitation is low, usually less than 400 mm per year. However, the west is wetter, but mainly falls in the form of snow.

Montana is a real rural state, the main agricultural activity is ranching because the land is too dry for traditional agriculture. To the east is the Bakken Formation, where much oil has been extracted since 2010. Mining has historically played an important role in the west of the state. In Butte is a large mining museum, the city is located on a copper mine. Tourism also plays an important role, especially the two National Parks Glacier and Yellowstone. Montana typically has a significantly lower unemployment rate than the US average.

Population of Montana is distributed as followed:

Montana is very sparsely populated, there are no really big cities, just some small towns with a regional character. Population growth in Montana is also relatively slow, growing quite rapidly in the late 1800s but was stopped abruptly by the Dust Bowl and the recession in the 1930s. Population growth has fluctuated since then, but is generally well below the US average. In 2012, the state passed the 1 million inhabitants mark. Montana is one of the whitest states in the country, there are hardly any African Americans, Asians or Hispanics. However, there are relatively many Native Americans.

The land east of the Continental Divide was purchased by the United States from France in 1803 as part of the Louisiana Purchase. At that time, the area had hardly any European influences. In the early 1800s, most Europeans were fur traders from Canada. Until 1846, the country west of the Continental Divide was part of an Anglo-American dispute over the exact border between Canada and the United States. The first permanent European settlement in Montana was established in 1841. Gold was discovered in western Montana in the second half of the 19th century, followed by a period of rapid population growth. Especially in Butte there was a lot of mining. In 1864, the Montana Territory was organized. In 1889 Montana became the 41st state of the United States.

In the early 20th century, a program was started to develop the steppe of eastern Montana. This area was one of the least developed in the United States east of the Continental Divide. The land was too dry for the typical farm of the time. The 1920s and 1930s saw a prolonged recession in Montana, which began earlier than the general depression in the United States of the 1930s. After World War II, there was a lot of defense investment in the state, especially around Malmstrom Air Force Base near Great Falls. In Montana, a large number of intercontinental missiles were deployed as a deterrent against the Soviet Union. 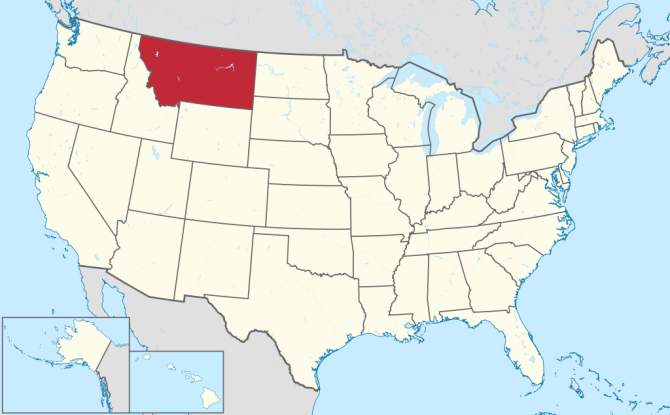