Nebraska is a state in the Midwestern United States. The state covers an area of 200,520 km², and has a population of 1.9 million inhabitants (2021), half of whom live in and around the city of Omaha. However, the capital is Lincoln.

Highway 97 through the Nebraska Sandhills.

The state of Nebraska is geographically part of the Midwest and is located at the transition from the flatter Great Plains to the higher High Plains in the west. The state clockwise borders South Dakota, Iowa, Missouri, Kansas, Colorado, and Wyoming. Nebraska measures a maximum of 700 kilometers from west to east and 330 kilometers from north to south. The eastern border of the state is formed by the Missouri River. The main river through Nebraska is the Platte River, which splits into the North Platte and South Platte in the west of the state. Nebraska is mostly flat to very flat, with elevation gradually rising from 1,000 feet in the southeast to 1,600 feet in the west. The landscape is often undulating, but has few areas with significant elevation changes. The highest point is the 1,655-foot Panorama Point, located at the tristate point with Colorado and Wyoming. It is visually imperceptible as a hill or mountain, it barely rises above the plains. Geographically, the Nebraska Panhandle is considered a separate region, being the westernmost part of the state.

Landscaping Nebraska is largely prairie, in the east this is cultivated with agriculture, often circular irrigation due to the low rainfall. To the west this lake turns into ranchland and grassy rangeland. Covering much of western Nebraska, the Sandhills is an area with many minor elevation changes. This consists of short grassland and sand, and is hardly cultivated. Some rivers have shallow canyons, such as the Pine Ridge to the north and the Wildcat Hills. The height differences here are usually 100 to 300 meters.

Nebraska has a humid continental climate in the east and a semi-arid climate in the west. Nebraska has warm to hot summers and cold winters. Precipitation varies from 800 mm in the southeast to 350 mm in the west. Maximum temperatures in Grand Island range from 2°C in January to 31°C in July. Nebraska is located in Tornado Alley, tornadoes and severe thunderstorms can occur anywhere in the state in the spring and early summer.

Nebraska’s per capita income is average in the United States, although the cost of living is relatively low. Nebraska has a large agricultural sector and produces a lot of meat, corn and other agricultural products. There is relatively little heavy industry in Nebraska. The American holding company Berkshire Hathaway has its headquarters in Omaha. Transportation plays an important role in Nebraska, especially east-west traffic. Bailey Yard, the largest shunting yard in the world, is located in North Platte. Union Pacific Railroad is also headquartered in Omaha. Nebraska had the lowest unemployment rate in the United States in 2015.

Population of Nebraska grew explosively in the second half of the 19th century, from 28,000 in 1860 to 1,062,000 in 1890. Population growth was much slower thereafter, mainly in the metropolitan area of Omaha. The population grew slowly, to 1.5 million in the 1980s, but then accelerated slightly. Nebraska is dealing with ‘rural flight’, many rural areas are losing inhabitants. Many people move to Omaha, the state’s only major city. Lincoln is Nebraska’s second largest city. Only Grand Island has more than 50,000 inhabitants, the rest is smaller. Almost all major cities in Nebraska are located on the Platte River and North Platte River, with the exception of the capital Lincoln. See list of cities in Nebraska.

The first Europeans in Nebraska were Spaniards and French in the late 17th and early 18th centuries. The first European settlement was near Plattsmouth in 1795. In 1819 Fort Atkinson was founded, the first American army base west of the Missouri River. European colonization of what later became Nebraska did not come about until the mid-19th century. In 1854, the Nebraska Territory was created by the United States Congress. The capital was Omaha, and the territory also included large portions of what later became Montana, Wyoming, western Dakotas, and a small portion of Colorado. On March 1, 1867, Nebraska became the 37th state and the capital was moved from Omaha to Lincoln. In the years 1870-1880, the population of Nebraska grew rapidly because of the good agricultural opportunities. 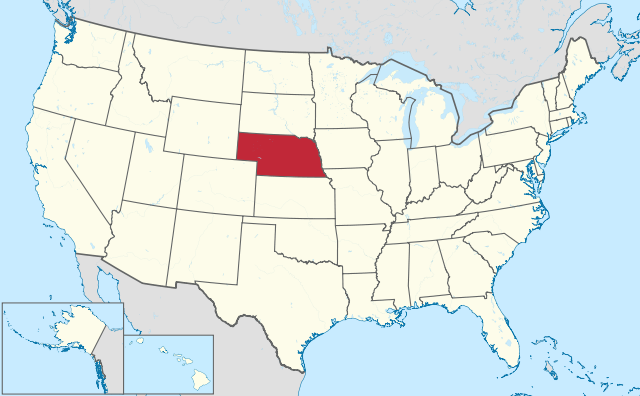