Nevada (pronunciation: /nɪˈvædə/) is a state in the western United States. The state is primarily a mountain and desert state, and its capital is Carson City. However, the largest city is Las Vegas. The state has 3.1 million inhabitants (2021) and has an area of ​​286,367 square kilometers, and is 7 times the size of the Netherlands.

US 95 between Las Vegas and Tonopah.

Nevada is a large state, it is located in the so-called ‘Intermountain West’ region, between the Rocky Mountains and Sierra Nevada. It borders the states of Idaho, Utah, Arizona, California and Oregon. Nevada measures 775 kilometers from north to south and 500 kilometers from west to east. Southern Nevada is in the shape of a triangle, its width decreasing south to the tristate point known as CalNevAri.

Although Nevada is often described as the ‘Nevada Basin’, the state is very mountainous. Numerous isolated mountain ranges are scattered across the state, with the greatest concentration in the middle. The mountain ranges are mostly oriented north-south and many have peaks of more than 3,000 meters, the highest point is the 4,007 meter high Boundary Peak, located 1 kilometer from the border with California. The valleys are mostly 1,200 to 1,800 meters above sea level, except in southern Nevada, where they are lower. This area is part of the Mojave Desert. Due to the large differences in height, the landscape and vegetation change significantly depending on the altitude.

Nevada consists largely of desert and other dry land. There is little farming, although there are areas of circular irrigation here and there, especially around Fallon and Yerington in the western part of the state. The rest is largely uncultivated rangeland and wild nature. More than 80 percent of the land is controlled by the federal government. Vegetation in the state ranges from scrubland to higher elevation forests. Several large salt lakes exist in the center and north of the state. In addition, Nevada has several large lakes, of which Lake Tahoe on the border with California is the best known. Pyramid Lake and Walker Lake to the west are also quite large lakes. The largest lake in area is Lake Mead, which lies on the border with Arizona and is formed by the Hoover Dam.

The major economic sectors in Nevada are tourism, mining, and ranching. Due to the rapidly growing population, the construction sector is also large. Nevada is known for its extensive gambling industry, Las Vegas in particular is known for this, but major casinos can be found all over Nevada, especially close to state lines. On the border with Idaho is the town of Jackpot, which largely consists of a casino. The casinos represent a multi-billion dollar industry, with revenue estimated at over $25 billion a year. Due to the many casinos, there are a lot of hotel rooms, especially in Las Vegas and Reno.

Mining plays an important role in rural areas, especially the extraction of precious metals such as gold and silver. However, its output is highly dependent on the prices of these commodities. Nevada’s economy closely follows the global economy and population growth. The state was hit hard by the recession from 2008, with a lot of homes for sale especially in Las Vegas due to foreclosure, but the recovery since 2012 has been one of the strongest in the United States. There is significant migration from California to Nevada due to the large difference in living costs between the two states.

Interstate 580 in the Washoe Valley between Carson City and Reno.

Nevada has an explosively growing population. In 1900 the state had only 42,000 inhabitants, which grew to 160,000 inhabitants in 1950. From then on, population of Nevada began to grow explosively, it was partly an overflow area for Southern California, where houses became increasingly unaffordable for the middle class. In the 1970s, Nevada crossed the half-million mark, and in the 80’s it crossed the 1 million mark. Shortly after 2000, Nevada crossed the 2 million population mark. However, the growth rate between 2000 and 2010 was significantly lower in percentage than in previous decades.

Historically, Reno was Nevada’s largest city. It wasn’t until the late 1950s that Las Vegas was the largest. Las Vegas has since become Nevada’s dominant city, although Reno has remained the second city. The capital, Carson City, has remained relatively small, although the Washoe Valley between Carson City and Reno has become urbanized, as has the Lake Tahoe region. Other Nevada towns are small, often known only because they are on a main road, such as Winnemucca, Elko, Wells, Tonopah, and Ely. See list of cities in Nevada.

In the 18th century, the first Europeans came through what is today the state of Nevada. The area was annexed by the Spanish Empire as part of New Spain. In 1804 it became part of Alta California, which was a state of Mexico from 1821. In 1848 it became part of the United States. Until then, Nevada was barely populated. Because of the gold rush in California, many emigrants moved through Nevada to the Sierra Nevada. From 1850 it was part of the Territory of Utah, and from 1861 as the Territory of Nevada, named after the Sierra Nevada. Nevada means “snow-covered” in Spanish. Nevada became a state in 1864. Nevada’s final boundaries were established in 1867, when northwestern Arizona became part of Nevada, including the area where Las Vegas would later emerge.

Nevada’s economy was based primarily on mining, especially the mining of gold and silver. To this end, new villages were established all over the state, which remained after the end of the gold rush as ghost towns from the late 1800s. Federal investment was primarily military and infrastructure, especially the construction of the Hoover Dam in the 1930s. The ‘Nevada Test Site’ was also created north of Las Vegas, a large and inaccessible military test site. Numerous nuclear tests have been conducted here in the desert. Between 1951 and 1962, 100 nuclear tests were conducted in the open air, but the majority, 828 tests, took place underground. A total of 928 nuclear explosions were carried out until the end of the tests in 1992. 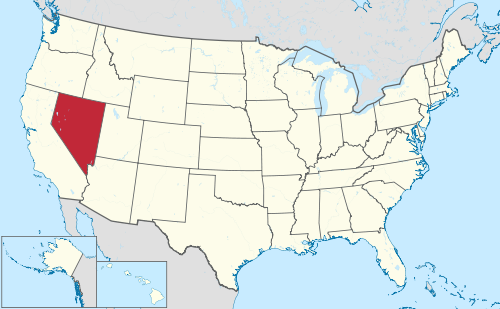