New Jersey is a state in the northeastern United States. The state has 9.2 million inhabitants (2021) and the capital is Trenton. The largest city is Newark. With an area of 22,608 km², it is almost half the size of the Netherlands.

New Jersey is located in the northeastern United States, on the Atlantic Ocean. The state borders New York, Pennsylvania and Delaware by water. The state measures a maximum of 275 kilometers from north to south and 100 kilometers from west to east. The state has a long coastline with so-called ‘barrier islands’, with lagoons and wetlands behind it. The state is predominantly densely forested, especially inland southern New Jersey is a densely forested and sparsely populated region. The state is bordered by major rivers, the Hudson River to the east and the Delaware River to the west, which forms the entire border with Pennsylvania. In addition, there are several short rivers. The state has a number of small lakes, often small reservoirs.

The state is the most urbanized of all US states, with many of New York City ‘s suburbs and satellite cities located in northern New Jersey, while the suburbs of Philadelphia lie in the west. The area in between is also highly urbanized, as is almost the entire coastal region up to Cape May in the south. Despite strong urbanization, the state is densely forested. Northwest New Jersey has some low hills, the south is flat and low-lying. The 550-foot High Point is the highest point in the state, near the tristate point with New York and Pennsylvania.

New Jersey has a predominantly humid subtropical climate, the northwest has a humid continental climate. The state has warm and humid summers and rather cold winters, tempered in the south by the Atlantic Ocean. It is a precipitation-rich state with 1,100 to 1,300 mm of rain and snow. The average maximum temperature in Newark is 4°C in winter and 30°C in summer. The state is prone to tropical cyclones and depressions that cause flooding with some regularity. The coast is prone to the impact of hurricanes, although direct landfall in New Jersey is rare.

The state is one of the most prosperous in the United States, but there are strong contradictions: old downtown cities like Trenton, Newark, Jersey City and Camden are poor and run-down, while the suburbs are prosperous. New Jersey’s tax level is one of the highest in the nation, especially since the 2016 fuel tax has been raised to one of the highest in the United States. The state has a relatively large amount of industry, especially in the old downtown cities opposite New York, where ports and heavy industry are present. It is an important transit state, especially for north-south traffic along the east coast. New Jersey also has tourism, mainly coastal beach tourism and the gambling industry in Atlantic City in particular. Agriculture does not play a major role in New Jersey, little land is suitable for cultivation, most of the land is urbanized or densely forested.

New Jersey had a relatively small population for a northeastern state for a relatively long time, most immigrants went to New York City in the 19th century, and to a much lesser extent to New Jersey. It wasn’t until around 1880 that New Jersey crossed the 1 million population mark. The state then experienced a long period of strong population growth until 1970. After that, population growth leveled off significantly, although New Jersey is not a shrinking state. Population of New Jersey is strongly suburban in character, there are no really big cities, but there are large urban regions, which cover a large part of the area of New Jersey. See list of cities in New Jersey.

The state has a somewhat average proportion of African Americans, but a rapidly growing proportion of Asians. The proportion of whites (non-Hispanic whites) has fallen sharply, although they still form a majority of the population. The proportion of Hispanics is relatively high for the northern United States, but this is mainly due to a large number of residents of Puerto Rican descent.

The Dutch were the first Europeans to claim parts of New Jersey, mainly in the Hudson River valley in the 17th century. In 1664 it was annexed by the British. New Jersey was one of thirteen colonies that rebelled against British rule in 1776 and played an important role in the revolution. In 1787, New Jersey became the third state of the United States. From the mid-19th century, the north of the state began to industrialize. There was no fighting in New Jersey during the American Civil War, but the state fought on the side of the Union. The northeast cities across from New York City began to grow as industrial satellite cities in the 19th century, and developed a large number of suburbs from the 20th century. New Jersey suburbanized at a rapid pace. 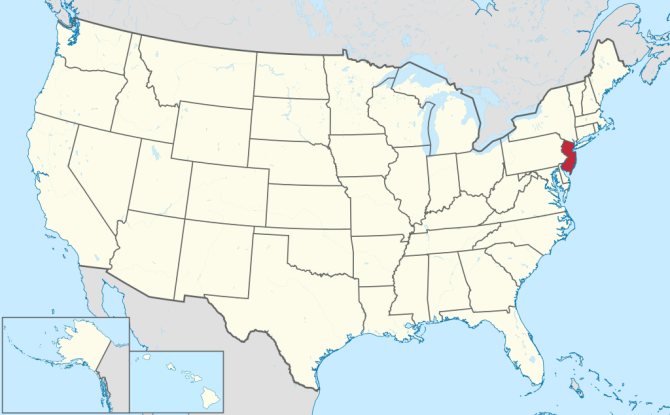