New York is a state in the United States. New York is located in the northeast of the country and has 19.8 million inhabitants (2021). The capital is Albany, New York City ‘s largest city. In addition, there are several other major cities in the state. The state has an area of 141,299 square kilometers, which makes it more than 3 times the size of the Netherlands.

I-87 in the Adirondacks in Upstate New York.

New York belongs to the northeastern United States, but is not counted as part of the New England region. The state is located on the Atlantic Ocean, as well as on the border with Canada ( Ontario & Québec ). It further borders the states of Vermont, Massachusetts , Connecticut, New Jersey, and Pennsylvania. The state is divided geographically into Upstate New York, which comprises the majority of the state, and ‘Downstate’, which comprises the conurbation around New York City. includes. Mainland New York has only a short coastline with the Atlantic Ocean, but the elongated Long Island results in a long coastline.

In the northeast of the state are the Adirondack Mountains, a mountain region with peaks between 1,000 and 1,500 meters that is sparsely populated and densely forested. The 1,628 meter high Mount Marcy is located here and is the highest point in the state. The Catskill Mountains separate Upstate from Downstate and are a forested mountain range with peaks up to 1,200 meters. Elsewhere in the state, large valleys alternate with hill country. The major rivers are the St. Lawrence on the border with Canada, the Hudson River on the southeast, and the Delaware River on the border with Pennsylvania. Famous are the Niagara Falls on the border with Canada, which connect the large lakes Lake Erie and Lake Ontario. In addition, New York has the so-called ‘Finger Lakes’ in the middle of Upstate New York, a number of elongated lakes southwest of Syracuse. The large Lake Champlain forms part of the border with Vermont. In addition, there are numerous smaller lakes in the state, including a number of reservoirs.

New York largely has a humid continental climate with warm summers and fairly cold winters. The New York City region has somewhat warmer summers and milder winters than regions inland. Particularly along Lake Erie and Lake Ontario, there is frequent extreme winter snowfall called ‘Lake-Effect Snow’, with a westerly wind blowing over the lakes and causing heavy snowfall on the eastern side. One meter of snow can easily fall in these areas. The average maximum temperature in New York City is 3°C in winter and 29°C in summer. In Upstate New York, winters are slightly colder, but summers are often comparable to New York City, although often slightly less humid. The New York area was hit hard by Hurricane Sandy in 2012.

New York is one of the most important economies in the United States, especially the conurbation around New York City. The city is the economic center of the United States, the most important stock exchange, the New York Stock Exchange is located there and is better known as ‘Wall Street’. The economy of the New York City area is primarily service-based, with industry still present, but of less importance than Upstate New York, where cities have historically been industry-based. These cities are often counted as part of the ‘Rust Belt’, cities such as Buffalo, Rochester and Syracuse where heavy industry has shrunk in importance and where the population has often also shrunk. The Upstate New York region has several economic centers with small and medium-sized urban areas. Transport plays an important role here,

New York was the dominant state of the United States for a long time, the state passed the 1 million inhabitants shortly after 1810 and in 1920 already had more than 10 million inhabitants. In the 1960s, California overtook New York state in terms of population. In the 1990s, Texas overtook the state, followed by Florida in 2015. Most international immigrants originally came to live in and around New York City. The city was historically the main point of entry into the United States, especially in the 19th and early 20th centuries, Ellis Island was well known. However, the state of New York has to deal with a major migration deficit, many more people move from New York to other states within the United States than the other way around. The growth of the state is mainly due to natural growth and international immigration. Many seniors sell their homes for a lot of money in New York and then move to the southern United States, especially Florida, but also other southeastern states.

Population growth in the state is unevenly distributed, largely due to New York City. Population growth has leveled off sharply since the 1960s, even contracting in the 1970s. The state has been growing well below the US average since the 1960s. Population growth is particularly low in western Upstate New York. The city of Buffalo in particular has lost many inhabitants, between 1950 and 2010 the city lost more than half of its inhabitants. Rochester and Syracuse also have significantly declining populations. In these cases, the suburbs still have a stable population, so that the agglomerations as a whole do not shrink so much.

The state has a diverse population, the proportion of African-Americans is larger than the American average, and the proportion of Hispanics is also relatively high. The state has the second largest number of African Americans (after Georgia ) and the second largest number of Asian Americans (after California ). Many people from Puerto Rico, Jamaica and Dominica live in the state. The largest group by ancestry are Italian-Americans, followed by Irish-Americans.

Population of New York is relatively suburban in character. Apart from New York City, the largest city in the United States, there are only four other cities with more than 100,000 inhabitants, including one New York City suburb (Yonkers). The suburbs of New York City are generally small, but numerous. Few suburbs have more than 50,000 inhabitants. The suburbs around other cities such as Rochester and Albany are also relatively small. See list of cities in New York.

In 1524, the Italian Giovanni da Verrazzano sailed through the coastal region of New York. In 1609, Henry Hudson mapped the Hudson Valley for the Dutch East India Company, and was actually looking for a route to Asia. In 1614, the Dutch built the first fort in the state, Fort Nassau where Albany is now located. New Amsterdam was founded in 1625, later to become New York City. The Dutch founded the colony of New Netherland there, but the English conquered the colony during the Second Anglo-Dutch War of 1665-1667. New York was the only colony in 1776 that did not vote for the Declaration of Independence because the delegates did not have the mandate to do so. One-third of the battles during the American Revolutionary War took place in New York, including the largest in Brooklyn, after which New York became independent. In 1788, New York formally became the 11th state of the United States. New York City was the capital of the United States for some time, until 1790.

In 1825, the Erie Canal opened, making the state a major transit state for transportation inland, via the Hudson River northwards, and westwards via the Erie Canal to the Great Lakes. Buffalo and Rochester in particular started to grow as a result. After 1850 the importance of the canal diminished due to the development of railways. From the early 19th century, New York was the main entry point for immigrants from Europe, in particular, but also from other parts of the world. In 1892 Ellis Island opened to better regulate immigration. Between 1892 and 1954, 12 million immigrants entered the United States through Ellis Island. The conurbation around New York City grew rapidly during this time, although from the 1930s the focus was more on the suburbs and suburbs. The deindustrialization did the economy of Upstate New York no good, and resulted in a continuous population decline in the central cities, partly due to suburbanization. New York’s dominance as the largest state began to be reduced from the mid-20th century, mainly because California became the largest state, later in the late 20th and early 21st century, New York was also overtaken by Texas and Florida. 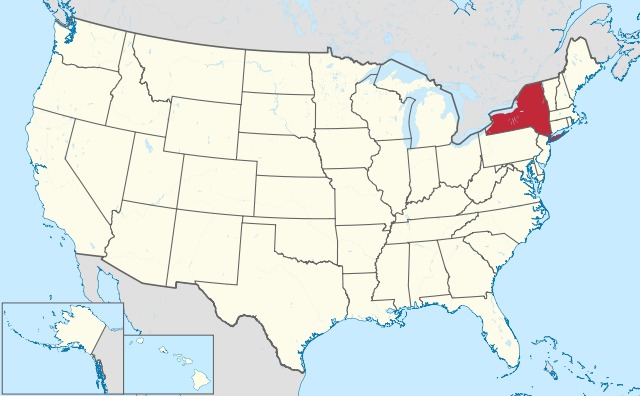