North Carolina is a state in the eastern United States. The state has 10.5 million inhabitants (2021) and the capital is Raleigh. The largest city is Charlotte. The area is 139,509 square kilometers and is therefore more than 3 times the size of the Netherlands. North Carolina’s nickname is the Tar Heel State.

North Carolina is the fourth largest state east of the Mississippi, measuring up to 800 kilometers from west to east and 300 kilometers from north to south. It is located on the Atlantic Ocean and has an extensive coastline that includes the Outer Banks, lagoons (Pamlico Sound) and estuaries. The state is bordered by Virginia to the north, Tennessee to the west, and Georgia and South Carolina to the south.

The state is typically divided into three geographic regions. To the east is the Atlantic Coastal Plain, which is predominantly forested and extends approximately 200 kilometers inland and covers nearly half of the state’s area. The center of the state is formed by the Piedmont, a low-lying plateau with small elevation changes. Most of North Carolina’s major cities are located here. The area here is also predominantly forested. Western North Carolina is made up of the Appalachian Mountains and their foothills. This area varies from hilly to mountainous on the border with the state of Tennessee. The 2,037-meter-high Mount Mitchell is not only the highest point in North Carolina, but that of the entire eastern part of North America.

No major rivers flow through North Carolina, most rivers are small and shallow, although several rivers have been dammed up as reservoirs. Most of the rivers flow into the Atlantic Ocean, but a small portion flows into the Gulf of Mexico.

North Carolina has a humid subtropical climate, with winters being milder in the east than in the west. Snow does fall every year in North Carolina, especially in the western half. The Piedmont region is notorious for its high levels of sleet as it often lies on the south side of a depression and falls just around freezing in such situations. The Outer Banks in particular are regularly hit by hurricanes. The impact of hurricanes inland is limited to heavy rainfall. The average maximum temperature in Charlotte ranges from 10°C in winter to 30°C in summer.

North Carolina has been one of the most successful states in the east of the country since the 1980s, with sustained population growth and diversification of the economy. The cities of Charlotte and Raleigh in particular attract many high-tech companies. North Carolina is seen as a competitor to California and the northeastern United States, mainly because house prices are significantly lower. Aside from neighboring states, most of the domestic migrants in North Carolina come from states such as California, New York, New Jersey and Pennsylvania. [2] The largest city of Charlotte is a major financial center in the United States and is the headquarters for the Bank of America and formerly Wachovia. The cities in North Carolina are often praised for their good investment climate. North Carolina has also become a competitor to the Atlanta region, which has similar traits. North Carolina has weathered the crisis better than the Atlanta area since 2008.

Population of North Carolina is distributed as followed:

North Carolina has traditionally been one of the more populous states in the country. Already in the 1860s, the state exceeded the limit of 1 million inhabitants, which doubled to 2 million inhabitants shortly after 1900. Between the 1930s and the 1990s, the population increased by little more than the American average, but accelerated from the late 1980s due to the strong economic position. Between 1990 and 2015, the population grew from 6.6 to 10 million.

North Carolina has traditionally been home to many African-Americans, which has its origins in the original economy, where many Africans worked as slaves. However, the proportion of Latino and Hispanic is relatively low. The proportion of Asians is low, but growing rapidly.

The state has several major cities. Charlotte is the largest city, followed by the capital Raleigh. Both cities have a fast-growing agglomeration, but retain somewhat of their small-town character, as they have a small center and the majority consists of post-war residential areas of a small-scale character. Similar to Atlanta, the population density of the cities is relatively low and the buildings are very scattered in the dense forest. Winston-Salem is one city, but forms a conurbation with the nearby cities of Greensboro and High Point. Durham and Raleigh are often mentioned in the same breath because of their proximity. Despite the long coastline, there is only one larger city on the Atlantic Ocean, namely Wilmington. However, this is a relatively small city whose harbor is no match for that of Charleston in South Carolina. See list of cities in North Carolina.

The first Europeans in what is now North Carolina were Spaniards in the mid-16th century and built a fortress there. This only existed for a short time, but was the first European attempt at colonization of the American interior. The Roanoke Colony was founded by the English in the late 1580s. In 1587, the first English child in North America was born on Roanoke Island. It has never been known what happened to this colony, and is referred to as the ‘Lost Colony’ and has somewhat mythical status in American history.

What is now North Carolina belonged to the Virginia Territory in the 16th century. In 1663, King Charles II of England approved a new colony that he named Carolina after his father Charles I. This also established the present-day border between Virginia and Carolina. In 1710 it was divided into North Carolina and South Carolina. On April 12, 1776, the colony was the first to instruct to vote for the Declaration of Independence. This date is on the flag of North Carolina. In 1789, North Carolina passed the United States Constitution and became a state of the United States. At the time, it was the third largest state in the country in terms of population. In 1840 the state capitol in Raleigh was completed. At that time, North Carolina was a very rural state, Wilmington alone had more than 10,000 residents in 1860. The capital, Raleigh, had only 5,000 residents. In 1861, North Carolina became the last state to join the Confederacy and fight in the American Civil War until 1865. The state was rebuilt after the Civil War, much of the infrastructure was destroyed. Throughout the 19th century, North Carolina lost importance within the United States, descending from the 3rd to the 16th most populous state.

At the end of the 19th century, industries began to develop in the Piedmont, the region that would eventually dominate the state because most major cities are located here. North Carolina did not grow particularly fast for much of the 20th century, roughly at the American average. It was from the 1980s that it became a more dominant state. In 1900, it was the 14th largest state by population, in 2000 it was the 10th largest state and moved up two more places in 2020. North Carolina’s population is comparable to neighboring Georgia, but has one city in Georgia. dominant ( Atlanta ), North Carolina has several larger cities. 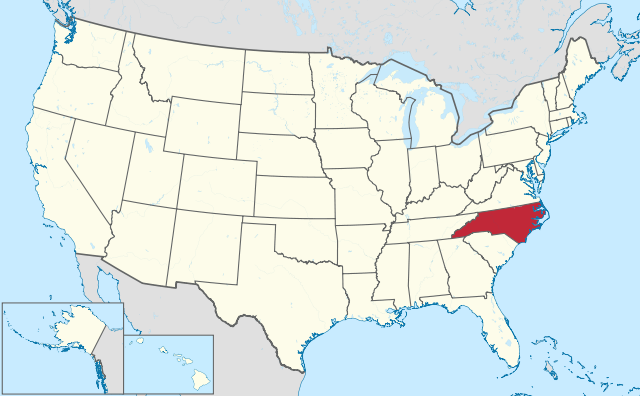