North Dakota is a state in the northern United States. The state has 775,000 inhabitants (2021) and the capital is Bismarck. The largest city is Fargo. The state has an area of 183,272 square kilometers, and is 4.5 times the size of the Netherlands.

Bridges over the Missouri River in Bismarck.

North Dakota is located on the border with Canada, in the north of the Great Plains. The state borders the states of Minnesota, South Dakota, and Montana and the Canadian provinces of Manitoba and Saskatchewan. The state measures a maximum of 580 kilometers from west to east and 340 kilometers from north to south. The main river is the Missouri River which flows right through the county and is dammed with several large reservoirs, including Lake Sharpe, Lake Oahe, and Lake Sakakawea. The Red River forms the border with Minnesota and flows north into Canada. The Devils Lake is a larger lake in the north of the state.

The state is almost uniformly flat, there are hardly any areas with significant height differences. In terms of nature, the valley of the Little Missouri River in the west of the state is the most beautiful, with about 200 meters in elevation and so-called ‘Badlands’, an eroded landscape. This is where Theodore Roosevelt National Park is located. The highest point in North Dakota is the 1,069-foot White Butte. The site rises westward from 250 to 1,000 meters. There is not really a clear transition from the classic Great Plains to the High Plains, the landscape gradually dries out towards the west. Most often, the Missouri River valley is used as a dividing line. The state has hardly any forest areas, the landscape consists of agricultural areas in the east, which changes into rangeland and ranchland in the west.

North Dakota has a continental climate with very cold winters and warm summers. The average maximum temperature in Fargo is -8°C in January and 28°C in July. Temperatures can drop below -40°C in winter. Precipitation is relatively light, ranging from 560 mm in the east to 350 mm in the west, some of which falls in the form of snow. Tornadoes sometimes occur in the summer, but they are less numerous than further south.

North Dakota is largely an agricultural state, but the massive growth in oil and gas production in the west of the state made North Dakota the fastest growing state in the United States for several years in a row, both in population and economy. The state has weathered the recession the best from 2008, and for a long time had the lowest unemployment rate in the country.

Shale gas is extracted on a large scale in the state. Oil was discovered in North Dakota in 1951, and most of this is in the Bakken Formation, part of which is in Montana and Canada. The Bakken Formation has potentially huge oil reserves, but only part of this is economically and technically recoverable. Western North Dakota also has large reserves of lignite, and the state is the second largest producer of lignite in the United States.

The city of Fargo is economically the dominant city in North Dakota and has a large catchment area well into Minnesota. Traditionally, Fargo’s economy was based on agriculture, but this share has fallen dramatically. In particular, the government and semi-government is strongly represented in Fargo.

Fargo has always been the state’s largest city, but Bismarck wasn’t much smaller in the early 20th century. Fargo’s dominance increased. In any case, the population of the various cities in North Dakota has grown reasonably despite the stagnation of the state as a whole. This was mainly due to ‘rural flight’, in which inhabitants of the countryside moved to the city. Both Bismarck and Fargo experienced steady population growth from the 1950s onwards. The city of Grand Forks experienced a somewhat slower growth and even a contraction in the 1990s. The small town of Williston in northwestern North Dakota is the center of the oil industry and experienced very strong growth in 2010, its population nearly doubled between 2005 and 2015. See list of cities in North Dakota.

The first Europeans reached North Dakota in 1738, and the region became part of the Spanish colonial empire in 1762, but the area had virtually no European settlements. The southwest of what is today North Dakota was part of the Nebraska Territory from the mid-19th century, which was organized as the Dakota Territory in 1861. This also included South Dakota and parts of what are now Wyoming and Montana. North Dakota became a state along with South Dakota in 1889. The land was suitable for agriculture and the population grew rapidly in the late 1800s and early 1900s, a pattern seen in many western states where agriculture was possible.

North Dakota was underdeveloped before 1950. There were many railway lines, but the road infrastructure was very poor and the population mainly lived in the countryside. Before 1970 there were no towns with more than 50,000 inhabitants. Beginning in the 1950s, the federal government began investing heavily in North Dakota. Two major air bases were built, at Minot and Grand Forks, and the huge Garrison Dam on the Missouri River. This created Lake Sakakawea, the third largest reservoir in the United States. The Development of the Interstate Highways The late 1950s, 1960s, and early 1970s enabled rapid transportation across North Dakota, although the state has benefited less from east-west traffic as hoped. In the late 1970s and early 1980s, oil production in western North Dakota increased sharply, although this declined again with a drop in oil prices, as oil in the west is only extractable at higher oil prices. A similar cycle followed after 2010, although the economic impact was much greater from then on, resulting in the state’s first substantial growth in 90 years. 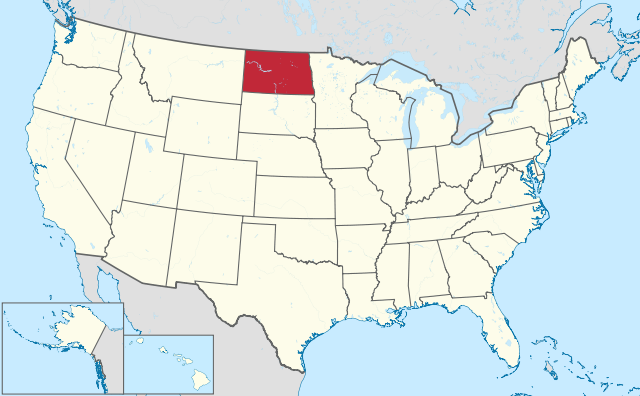