Oregon is a state in the United States, located on the west coast. The state has 4.2 million inhabitants (2021), on 255,026 km², more than six times the size of the Netherlands. The capital is Salem, the largest city is Portland.

I-84 in the Columbia River Gorge.

Oregon is located on the Pacific coast of the United States and borders the states of Washington, Idaho, Nevada, and California. The state measures a maximum of 600 kilometers from west to east and 480 kilometers from north to south. The state belongs to the Pacific Northwest region. The state has a very diverse landscape, with the spectacular coastline rising to the Coast Ranges, a relatively low and densely forested mountain range, beyond which lies the fertile Willamette Valley. Most of the state’s major cities are located here. To the south are the Klamath Mountains and the dividing line between western and eastern Oregon is the Cascade Range, a dominant mountain range with the 3,429-foot Mount Hood as its highest point. Crater Lake is also located in the Cascades, the deepest lake in the United States (592 meters).

Eastern Oregon is geographically a larger area than the west, occupying nearly two-thirds of the area. This is a much drier area, with deserts in the southeast and the Columbia Plateau at 500 to 700 meters dominating the northern part, and the larger High Desert in the south. In this area are several mountain ranges with peaks between 2,500 and 3,000 meters.

Oregon’s main river is the Columbia River, which largely forms the border with Washington state. Passing through a mighty canyon east of Portland, this wide river is one of the largest rivers in the United States, and the largest flowing into the Pacific Ocean. The narrower but more raging Snake River forms part of the border with Idaho and flows through Hells Canyon.

Oregon has a diverse climate. The west has a precipitation-rich mild semi-Mediterranean climate. East of the Cascades there is a dry desert climate, partly because of the altitude a cold desert climate. Snow falls in the mountains and east in winter, but 70% of the population lives in the much milder Willamette Valley, where snow falls rarely. The average maximum temperature in Portland is 8°C in winter and 27°C in summer.

Oregon is an average state in terms of income in the United States. Traditionally, agriculture has been dominant in the Willamette Valley, the primary reason for the state’s growth in the 19th century. Forestry is also common in the west, but farming in the east is limited to ranching due to low rainfall and rivers. Tourism plays a significant role, especially the coast and the Cascades are popular with tourists. Oregon has relatively little industry, most of it related to agriculture. The city of Portland dominates the state economically. The state attracts many migrants from the other expensive coastal regions, as it is cheaper than both California and the Seattle area.

Oregon has had a rather fluctuating population growth since 1900. The population in 1900 was 413,000 and crossed the 1 million mark by 1940. The state has had periods of rapid and moderate growth since then. The limit of 2 million inhabitants was reached around 1970 and 4 million in 2015. Compared to more southern states, Oregon is a relatively white state, there are few African-Americans and the group of Hispanics is still relatively small. Asians are a small but fast-growing group.

Population of Oregon is highly concentrated in the Willamette Valley in the state’s northwest. The City of Portland and its agglomeration is by far the largest in the state. The Oregon metropolitan area extends into Washington State, with the prominent city of Vancouver (not to be confused with Vancouver, Canada). The capital Salem is about 70 kilometers south of Portland, the city of Eugene is 160 kilometers south of Portland. There are few other noteworthy cities in Oregon. In the Willamette Valley are a few small towns such as Corvallis and Albany, as well as several Portland suburbs. The city of Bend is the largest in eastern Oregon, other places in the east have a large catchment area because of the low population density, but are otherwise small places such as The Dalles and Klamath Falls. See list of cities in Oregon. Southeast Oregon is extremely sparsely populated.

Oregon was visited by Europeans from the south in the mid-16th century, but they did not establish any settlements there. Until the 18th century, visits were mostly limited to explorations along the coast. It was not until the early 19th century that Europeans permanently resided in Oregon, especially trappers and traders from French-speaking Canada. Many place names and geographic points in Oregon are of French origin. Lewis and Clark’s legendary expedition between 1804 and 1806 also passed through northern Oregon. It wasn’t until 1811 that there was the first permanent European settlement in Oregon, today’s Astoria at the mouth of the Columbia River. Oregon’s development began to pick up from 1840. From that time on, migrants from the Midwestern United States began to migrate to the Willamette Valley via the historic Oregon Trail. In 1846, the border between the United States and British North America was established as the 49th parallel, the present-day border with Canada, definitively placing the region under American administration, and in 1848 the area was organized as the Oregon Territory. Oregon became a state in 1859. The state developed little outside the Willamette Valley and the Columbia River valley. Even today, the areas outside this area are largely agricultural and sparsely populated. 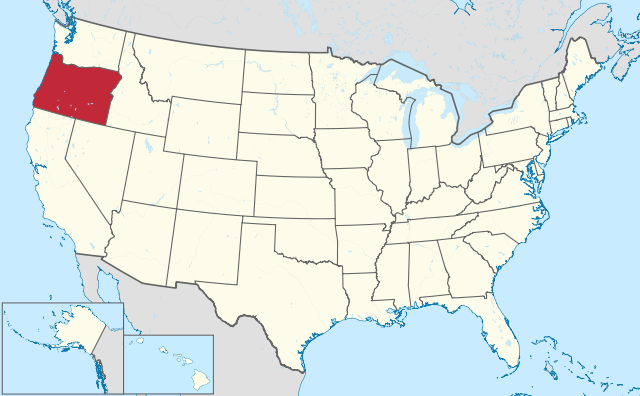