Pennsylvania is a state in the northeastern United States. The capital is Harrisburg and the two most famous cities are Philadelphia and Pittsburgh. The state has 12.9 million inhabitants (2021) and has an area of 119,283 square kilometers, making it three times the size of the Netherlands.

I-80 in Northern Pennsylvania.

Pennsylvania is located in the northeastern United States and borders the states of New York, New Jersey, Delaware, Maryland, West Virginia, and Ohio clockwise. Across Lake Erie, it borders Canada, namely the province of Ontario. Although Pennsylvania does not have a classic coastline, it is connected to the sea via the Delaware River, because this is a tidal river. Pennsylvania measures a maximum of 495 kilometers from west to east and 285 kilometers from north to south.

Pennsylvania is largely dominated by the Appalachian Mountains, a forested mountain range with steep ridges. These are particularly prevalent in the middle of the state. The north is hilly in a different way and even more densely wooded. The far west is flatter and is actually part of the Great Plains. The southeast is flatter. Several major rivers cross the state. To the west, the Allegheny and Monongahela Rivers form the important Ohio River from Pittsburg. The Delaware River forms the eastern border of the state, and the Susquehanna River is a wide river down its middle.

The state has a predominantly humid continental climate, the southeast has a humid subtropical climate. Pennsylvania has warm summers and fairly cold winters, especially in the north and west. Extreme snow can fall around Lake Erie as air sweeps over the lake and dumps massive amounts of snow on the shoreline. The average maximum temperature in Harrisburg is 3°C in winter and 30°C in summer.

Pennsylvania is an important industrial state, especially for the manufacturing industry. It is one of the most important states in the country economically, although it ranks in the middle when it comes to prosperity. Pittsburgh was historically known as a major city of the steel industry, but the economy here has had to refocus since the steel industry contracted in the 1970s, and Pittsburgh has been more successful than many other cities in the so-called ‘Rust Belt’.. Philadelphia is home to many financial institutions and manufacturing industries, although the city is somewhat overshadowed by New York City and Washington. Agriculture plays an important role outside the major cities.

Pennsylvania, along with New York, was the first state to cross the 1 million population mark, as early as 1820. However, Pennsylvania has always been somewhat in the shadow of New York. In 1900 Pennsylvania already had 6.3 million inhabitants, but the growth of the population of Pennsylvania leveled off from the 1920s. Growth has been much lower than the US average since 1930 and stagnated between 1970 and 1990.

The state has a demographic that is fairly average for the United States, although the proportion of Hispanics is relatively low. A well-known population group in the state are the Pennsylvania Dutch, who, contrary to what the name indicates, are not Dutch, but Germans. Nearly a third of Pennsylvania residents are of German descent. Well-known, but relatively small in size, is the Amish group.

Pennsylvania has several major cities and metropolitan areas. The largest municipality is Philadelphia, which has an urban area that extends into three states. Philadelphia is located in southeastern Pennsylvania and has a dense urban core, but very sparsely built and sprawling suburbs. The city of Pittsburgh is located in the west of the state in a highly hilly area and also has a fairly sparsely built-up area. Furthermore, Allentown alone has more than 100,000 inhabitants, but there are several agglomerations with a relatively small center city, such as the capital Harrisburg in the middle and Scranton in the northeast. See list of cities in Pennsylvania.

The Dutch were the first settlers to inhabit parts of present-day Pennsylvania. In 1664 the Dutch colony was conquered by the British. The Province of Pennsylvania was created by William Penn in 1681. On July 4, 1776, the United States Declaration of Independence was signed in Philadelphia. In 1787 Pennsylvania became the second state of the United States. The capital was Philadelphia first, then Lancaster and, since 1812, the city of Harrisburg. In 1863, the Battle of Gettysburg was fought in the state, the largest battle and turning point in the American Civil War. Later in the 19th century, Pennsylvania started to industrialize, especially the steel industry in the west was dominant, but started to decline sharply from the 1960s. Especially Pittsburgh had to reorient itself economically and has done so successfully. In 1859, the first oil well in the United States was drilled at Titusville. Pennsylvania was one of the first major states where population growth fell below 10% every decade census, as early as 1930. Despite this, Pennsylvania was the country’s second-largest state in population for more than 100 years, being overtaken by California in 1950. From the 1970s, it gradually lost its high ranking due to slow growth and meanwhile other states are growing much faster. In 1980 the state was overtaken by Texas, in 1990 by Florida and in 2000 by Illinois. 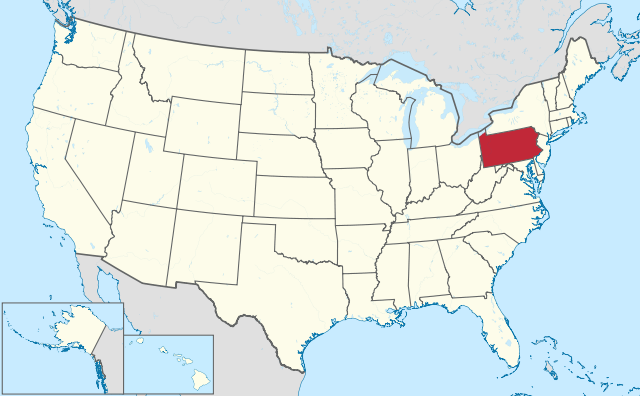