South Dakota is a state in the northern United States. The state has 895,000 inhabitants (2021) and the capital is Pierre. The largest city is Sioux Falls.

I-90 on the Great Plains near Pierre.

South Dakota is located in the northern United States, on the Great Plains. The state clockwise borders North Dakota, Minnesota, Iowa , Nebraska, Wyoming, and Montana. The state measures a maximum of 610 kilometers from west to east and 380 kilometers from north to south. So South Dakota is a large state and sparsely populated. The Missouri River first forms the southern border and then flows through the center of the state and is dammed by several large reservoirs, including the large Lake Oahe. The Missouri River is the cultural divide in South Dakota, with mostly ranches and Native American reservations west of the river and more developed countryside east of the river.

South Dakota is mostly a flat state except for the southwest part of the state. This is where the Black Hills are located, of which the 2,208 meter high Harney Peak is the highest point in the state. Two national parks are also located near the Black Hills, Wind Cave National Park and Badlands National Park. The Badlands is an eroded landscape with small but abrupt elevation changes. There are no other major rivers besides the Missouri River.

The state has a semi-arid continental climate, with precipitation gradually increasing to the east. South Dakota has warm summers and cold winters. The average maximum temperature in the capital Pierre is -1°C in winter and 32°C in summer. The biggest weather extremes are blizzards in the winter and tornadoes in the spring.

South Dakota’s economy is based on agriculture and manufacturing. Large parts of South Dakota are suitable for agriculture, although the west is drier and mainly suitable for ranching. The cities of Sioux Falls and Rapid City are responsible for a significant portion of the state’s GDP. However, the Native American reservations in the west are underdeveloped and are among the poorest areas in the United States. One of the largest employers in the state is defense, especially due to the presence of Ellsworth Air Force Base near Rapid City.

Population of South Dakota grew rapidly in the second half of the 19th century, from 5,000 in 1860 to 400,000 in 1900 and 635,000 in 1920. Population growth has been much more moderate since then, no major cities have developed and the state has also contracted in the 1930s and 1960s. Population growth has been somewhat stronger since the 1990s. South Dakota is a white state, the main minority being Native Americans who mainly live west of the Missouri River. Sioux Falls and Rapid City are the state’s only larger cities. The far west does have a concentration of smaller cities, in addition to Rapid City also Sturgis, Spearfish and Belle Fourche, so that this area is more densely populated than east of Rapid City. To the east are a few smaller towns. See list of cities in South Dakota.

The first Europeans in the area were French in the 18th century. The area was claimed by France, although actual French influence was limited, the area had no European population besides Indians for a long time. The area was purchased from France in 1803 as part of the Louisiana Purchase by the United States. It was not until the mid-19th century that the population of the area began to grow. In 1856 and 1859, the towns of Sioux Falls and Yankton were founded. In 1861, the Dakota Territory was organized, encompassing the west of the former Minnesota Territory east of the Missouri River, extending west to the Rocky Mountains on what is now the border between Idaho and Montana. In 1868, the territory was reduced to the present Dakotas, which simultaneously became the states of North Dakota and South Dakota in 1889. the years’ 30 was the scene of the Dust Bowl and South Dakota’s population shrank for the first time. In the 1940s, four major dams were built on the Missouri River in South Dakota. Since then, the countryside has been shrinking, but the cities are growing. 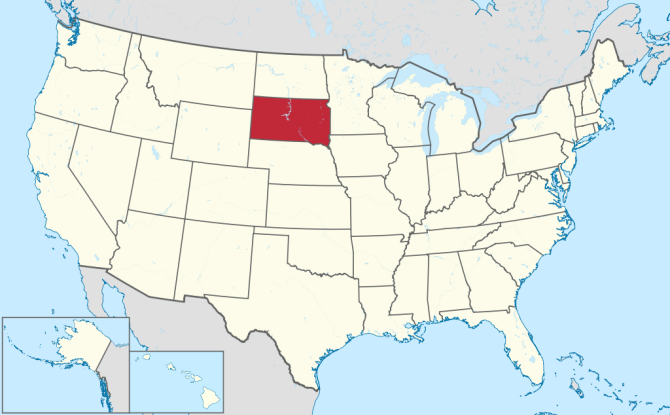