Tennessee is a state in the southeastern United States. The state has 6.9 million inhabitants (2021) and the capital and largest city is Nashville. The most historic city is Memphis. The state has an area of 109,247 square kilometers and is therefore about 3 times the size of the Netherlands.

Stretched greatly in the east-west direction, Tennessee borders many states, to the north to Kentucky and Virginia, to the east to North Carolina, to the south to Georgia, Alabama, and Mississippi, and to the west to Arkansas and Missouri. The state measures a maximum of 720 kilometers from west to east and 185 kilometers from north to south. The state belongs to the Upper South region and is predominantly hilly, with higher mountains in the east, part of the Appalachian Mountains. The 2,025-foot Clingmans Dome is Tennessee’s tallest mountain.

Tennessee’s western border is formed by the mighty Mississippi River. The Tennessee River and Cumberland River flow through the center and east of the state. Eastern Tennessee is distinctly mountainous and very densely forested, especially the border area with North Carolina is difficult to access. To the west is the Tennessee River valley, beyond which are several narrow ridges running southwest-northeast. West of it are hills in the middle of the state, which are heavily forested especially west of Nashville. West Tennessee is flatter and low-lying.

The state has a predominantly humid subtropical climate, with warm summers and cool winters. Precipitation is plentiful throughout the year, especially a southerly wind brings rain into Tennessee from the Gulf of Mexico, despite the state being quite far inland. The average maximum temperature in Nashville is 8°C in winter and 32°C in summer. Extreme weather often occurs in the remnants of heavy rainfall tropical cyclones and tornadoes, particularly in the western half of the state. In winter, Tennessee is often on the frost line, regularly resulting in significant sleet formation.

I-75 at Jellico in the Appalachian Mountains.

Tennessee has a relatively low income compared to many other states and usually ranks between the 35th and 40th highest income rankings. On the other hand, the cost of living is also low. Also, Tennessee is one of only a small number of states where there is no state income tax, making it an attractive state to move to. In Tennessee there is some industry, there are some car manufacturers with assembly plants in Tennessee. FedEx is a well-known company headquartered in Memphis. However, the state also has economic contradictions, for example Memphis is relatively poor while the Nashville region is fast-growing and more prosperous. Nashville is nationally known as the country music capital. Tourism also plays a role in Tennessee,

Tennessee has two major cities, Memphis in the west and Nashville in the center. These also have the largest metropolitan areas, with the Memphis metro area extending into the neighboring states of Mississippi and Arkansas. Chattanooga is the largest city in the south while Knoxville is the largest city in the east, so all parts of the state have a larger city. In addition, there are many smaller cities in Nashville’s area of influence are the larger cities of Clarksville and Murfreesboro, and smaller cities can be found throughout the state. The countryside is also relatively densely populated, only the Great Smoky Mountains are really sparsely populated.

The state passed the 1 million population barrier in 1850 and grew to 2 million in 1900. Since then, population of Tennessee has experienced somewhat more rapid growth than its neighboring state of Kentucky, with 3 million inhabitants in the 1940s, 4 million by 1970, 5 million in the 1990s and 6 million in the 2000s. The main source of population growth is the Nashville region, which is one of the faster-growing conurbations in the southeastern United States. This hasn’t always been the case, in 1950 Memphis was twice the size of Nashville, but since the 1970s Memphis’ population has been stagnant or shrinking, while Nashville’s population has continued to grow strongly, overtaking the city of Memphis around 2013. See list of cities in Tennessee.

The first Europeans in what is now Tennessee visited the region in the 16th century, with Hernando de Soto being the first to map the area for Spain in 1540. In 1756, the first British settlement in Tennessee was established. From the 1760s the first permanent settlements were established, mainly by the English and Scots. In 1796, Tennessee became the 16th state of the United States. Tennessee belonged to the Confederate States during the American Civil War between 1861 and 1865. In 1933, the Tennessee Valley Authority was established, a federal agency to counter the effects of the economic depression. Large dams were built to supply the countryside with electricity. Oak Ridge National Laboratory was established in 1942 as part of the Manhattan Project. 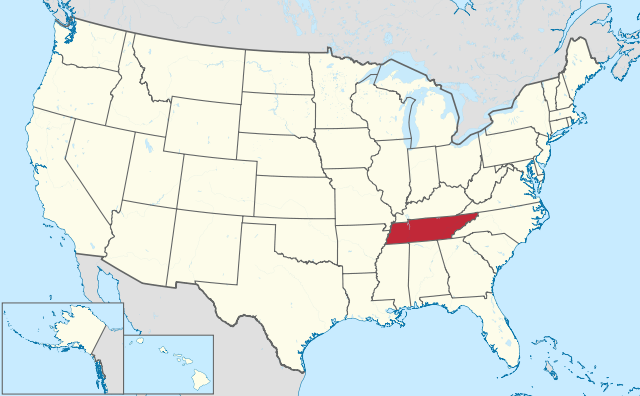