Texas is a state in the United States. The state is located in the central south of the country and is considered both a southern and southwestern state. Its nickname is the Lone Star State. It is the second largest state in both land area and population with a population of 29.5 million in 2021. Texas has a number of major cities, such as Houston, Dallas, San Antonio, and the capital Austin. See list of cities in Texas. Texas is vast and contains many different landscapes, although a fairly large part of the state is flat, with forests in the east, prairies in the middle and steppe and desert in the west. The state is one of the most dynamic and fast-growing in the United States.

Texas is a large state that belongs to both the south and southwest of the United States. Texas is often said to be the same size as France, but that includes French Guiana. Texas is considerably larger than metropolitan France. With an area of almost 700,000 km², it is twice the size of Germany and slightly smaller than Turkey. The term Everything’s Bigger in Texas is world famous. The shape of Texas is one of the best known of the American states. Texas measures over 1,200 kilometers from west to east and from north to south. Texas is located on the Gulf of Mexico and has a long coastline. The state has an international border with Mexico and borders the Mexican states of Tamaulipas, Nuevo León, Coahuila and Chihuahua. It further clockwise borders the US states of New Mexico, Oklahoma, Arkansas, and Louisiana. The landscape ranges from deserts in the west to the High Plains in the north, the prairies in the middle and the forests in the east of the state. The climate varies from arid desert to subtropical. The north, central and eastern parts of the state are particularly prone to severe weather.

Major rivers include the Rio Grande, the Red River, the Brazos River, the Pecos River, and the Canadian River. There are no major navigable rivers within the state. The urban areas occupy large areas, but there is no shortage of space in Texas. The urban areas of Dallas and Houston alone are the same size as the Netherlands, where together 12 million people live. The urban areas are generally not very rigid, with quite a few open spaces that have an almost rural feel within the cities. Especially in Dallas and Houston there are very large business parks. Most heavy industry is located in and around Houston.

Texas has more than 28 million inhabitants. Houston is the largest city while Austin is the capital. Other major cities include San Antonio, the Dallas-Fort Worth Metroplex, and El Paso. There are several other important cities, such as Corpus Christi, Laredo, Abilene, Lubbock and Amarillo. To the south lies the urbanized Rio Grande Valley. Texas’s population continues to grow sharply due to immigration from Mexico and other parts of the United States. Previously, the economy was mainly oil-based, but the economy has gradually become more diverse. Texas has been called the job engine of the United States and recovered remarkably well from the recession in 2007-2008. House prices fell only slightly, but are very affordable compared to many other economically important states. From 2008 to 2014, Texas jobs grew by 1.2 million, more than the rest of the United States combined.

Because of its large area, Texas has a varied landscape. The state is known for its prairies, but has more natural regions. Plains dominate the center, west, and north of the state. These become virtually treeless to the west and northwest, especially in the Texas Panhandle. Northwest Texas is formed by the Llano Estacado, a flat and treeless area, which descends through the Caprock Escarpment. Southeast of this is Palo Duro Canyon, the second largest canyon in the United States.

Eastern Texas is heavily forested, with the forests of the Piney Woods, say, the area east of I-45. This area has many reservoirs in the forests. There are many reservoirs around Dallas and Fort Worth in the North Texas region, but here the landscape is more of rolling prairies. The Texas coast is fairly flat, with several lagoons and bays. There are sandy beaches along the Gulf of Mexico, although beach tourism in Texas is not nearly as developed as further east. Galveston and South Padre Island in particular attract tourists to the sea.

In the area west and north of San Antonio and west of the capital Austin is the ‘Texas Hill Country’, an attractive area with many elevation changes, although there are no high mountains. South of it is the flat and monotonous South Texas. West Texas has the highest mountains, especially in Far West Texas, a region known as ‘Trans-Pecos’. Several mountain ranges have peaks of more than 2,000 meters in a wild desert landscape. The highest point is the 2,666-foot Guadelupe Peak near the New Mexico border, of which the nearby slightly lower ‘El Capitan’ is much more famous. The most beautiful nature can be found in the Big Bend region, along the border with Mexico south of the I-10. This region is very sparsely populated.

In many parts of the western and central Texas steppe, the monotonous landscape is complemented by countless oil wells (pumpjacks) and wind turbines. The Roscoe Wind Farm near Sweetwater is one of the largest in the country.

Texas is made up of several regions, with some regions overlapping each other. Texas can be divided into East Texas and West Texas, but the area in between is often referred to as Central Texas. East Texas sometimes starts east of I-35, sometimes east of I-45. This latter definition coincides with the landscape, the portion east of I-45 is much more forested than west of it. Southeast Texas often does not include Houston, but mainly includes the forests and coastal region around the Gulf of Mexico in the wider Beaumont region. The transition from Central Texas to West Texas is very vague. Scenically and demographically, everything west of I-35 is often already considered West Texas. The region around El Paso is often referred to as ‘Far West Texas’ or ‘Trans-Pecos’. For many Texans, El Paso is very far away in experience and reality.

South Texas usually includes everything south of San Antonio. The urban area along the border with Mexico is called the Rio Grande Valley. There is actually no overlap between South Texas and North Texas. In the image, the two regions do not border each other. “North Texas” usually does not refer to the geographic north, but the broad region around the Dallas-Fort Worth metropolitan area. The true north is the Texas Panhandle, centered around the town of Amarillo, although Lubbock is often considered below because of the region’s similarity.

US 385 between Brownfield and Levelland on the Llano Estacado.

In the 16th century, the first Europeans came ashore from the Gulf of Mexico in Texas. The European rulers of that time ignored Texas for a long time, only after more than 150 years after the first arrival of the Europeans did they start building a number of settlements. By 1680-1700, the Spanish began building churches in eastern Texas to counter the French threat. At the time, France controlled a large area from Louisiana to Montana. In 1718 the city of San Antonio became founded, as the first Spanish city. Resistance from Native American tribes and the great distances to the rest of the Spanish territories meant that Texas grew little. In 1803, the United States purchased a large area of ​​France known as the Louisiana Purchase, which included much of the Midwest outside of Louisiana. The Louisiana-Texas border was then established as the Sabine River. In 1821, the Mexican War of Independence ended with Texas becoming a part of Mexico, then the state of Coahuila y Tejas. In 1825, Texas had 3,500 residents.

In 1835 the Texas Revolution followed and a temporary government was established, but in 1836 Texas became a country, the Republic of Texas. The Republic of Texas mostly encompassed the eastern part of the present state, but its territorial claims extended as far as New Mexico and Colorado, even part of Wyoming. In the 1930s and 1940s, the United States attempted to annex Texas, which succeeded in 1845. Texas then became a state. A few years later, the Mexican-American War resulted in a victory for the United States, with Mexico losing large areas, including Alta California, present-day California, and parts of Arizona and New Mexico.. Texas also grew larger, up to the Rio Grande. In 1850, Texas’ final boundaries were established.

During the American Civil War from 1861 to 1865, Texas was part of the Confederacy, which fought the Union in the north. Texas was far from the war zones to the east and was not directly affected by the war itself. Texas did support the Confederacy with men and equipment. After the American Civil War, Texas again became a state of the United States in 1870. The population had already grown to 818,000 inhabitants, mainly in the east of the state.

In 1901, the first oil was found in Texas at Spindletop, near Beaumont, not far from the Louisiana border. After this, numerous oil wells were found in eastern and western Texas and the Gulf of Mexico. This resulted in a massive expansion of the oil industry and prosperity for Texas. Oil production peaked in 1972. In 1920 Texas had 4.6 million inhabitants. This was followed by the Great Depression and the Dust Bowl, which particularly severely affected northern and western Texas. Almost all farmland became unusable, forcing many farmers to move to California. The state grew relatively slowly until the 1950s, partly because of this.

World War II had a significant impact on Texas, the cities grew and industry became very important. In the 1960s, Texas diversified from an oil industry to high-tech, manufacturing, banking and transportation. The population grew from 7.7 million in 1950 to 11.2 million in 1970 and then doubled to nearly 25 million in 2010. Texas is one of the cheapest states in the United States in terms of housing, the population is highly concentrated in the four major metropolitan areas of Dallas-Fort Worth, Houston, San Antonio and more recently Austin. In 1948, the first freeway, the Gulf Freeway, later part of Interstate 45, opened. Most highways were built in the Interstate Highway era constructed in the late 1950s. Despite Texas having the largest highway network in the United States, there are vast areas without highways, especially in western Texas, where there are actually only two highways, I-10 and I- 20. The enormous population growth in the major cities ensures that the highway network there is continuously expanded, with nowhere in the world so many large stack nodes being used as in Texas. Houston in particular is known for its very wide highways and high intensities.

Austin, the capital of Texas.

Population of Texas grew strongly from the mid-19th century, moving from the 25th to the 6th most populous state between 1850 and 1900. In 1910, Texas was the first state outside the Northeast and Midwest to make it into the top 5 largest U.S. states. In the 1930s, Texas was overtaken by California and was the 6th state for some time. The large population growth in Texas came slightly later than in California, in 1970 Texas grew to the 4th state and since 2000 is the 2nd state of the United States, after California. 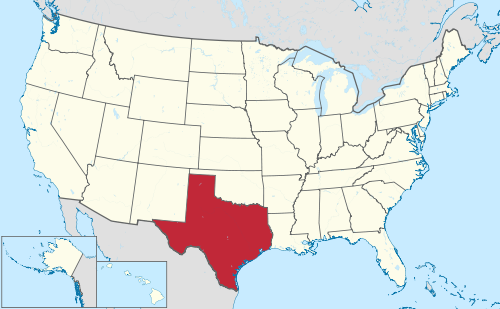