West Virginia is a state in the United States. The state is located in the east of the country and has 1.7 million inhabitants (2021). The capital and largest city is Charleston. The state measures 62,755 square kilometers, making it more than twice the size of the Netherlands.

Located in the Appalachian Mountains, West Virginia is a little tricky to place geographically, as it doesn’t really fall under the East Coast, Northeast, Midwest, or South. The state borders Pennsylvania, Maryland, Virginia, Kentucky and Ohio. The state has a distinctive shape and measures a maximum of 360 kilometers from north to south and 350 kilometers from west to east. The state has two geographic panhandles, in the north and east.

Most of West Virginia is mountainous and forested, with several ridges and hill areas. Characteristic of large parts of the state is that there are virtually no flat areas, with an irregular pattern of mountain ridges and narrow, winding valleys. The 1,482-foot Spruce Knob is the highest point in the state. The Ohio River is the state’s largest river and forms the entire border with the Ohio state of the same name. Major tributaries are the Kanawha River and Elk River. The Potomac River flows to the east. The rivers in West Virginia flow to both the Atlantic Ocean and the Gulf of Mexico. There are no national parks in West Virginia, but the New River Gorge National River in the south of the state does.

The state has a predominantly humid subtropical climate, with elements of a continental climate, with cold winters and warm summers. Higher parts, especially in the south, have a mountain climate. The average maximum temperature in Charleston is 6°C in winter and 30°C in summer.

Unlike other parts of the Midwestern and Northeastern United States, West Virginia has never really been suitable for agriculture. The state has an anomalous relief in which there are almost no flat areas, but also no clear valleys, except in the extreme east. As a result, West Virginia was skipped in the westward migration. Its location on the Ohio River and the Kanawha River made it possible to set up industry, fed by the coal mines. This was the economic base of West Virginia for a long time. From the 1960s onwards, the importance of the coal industry decreased, the coal was mined less and less in underground mines, and more and more by excavating the mountain tops, a process called ‘mountaintop removal mining’. This required far fewer workers.

Most rural areas, as well as central cities, then began to decline sharply, with most major cities in West Virginia having lost half of their population since 1950. Rural areas also contracted, especially in areas previously heavily mined. The isolated location and lack of alternatives left these regions without an economic base. Hardly any people migrate to West Virginia for work, most people move to neighboring states. The only exception is eastern West Virginia, the so-called ‘Eastern Panhandle’, which is experiencing strong economic growth due to a strong population growth.

In the 17th and 18th centuries, Europeans from Virginia and Pennsylvania visited the area that would later become West Virginia. At the beginning of the 19th century, the population did not grow as strongly as elsewhere in the region. During the American Civil War, West Virginia seceded from Virginia in 1861 and formally became the 35th state of the United States in 1863. The Civil War was the main reason for the secession of West Virginia, because this area wanted to stay with the Union, and the rest wanted to belong to the Confederacy.

After the Civil War, mining was developed in West Virginia and became the primary sector of the economy. Coal was mined in many parts of the state. Demand for coal during the industrialization of the East Coast caused the population of West Virginia to grow relatively rapidly after the Civil War, surpassing the 1 million population mark shortly after 1900. Population growth remained strong until just after World War II, when the contraction of heavy industry reduced demand for coal. 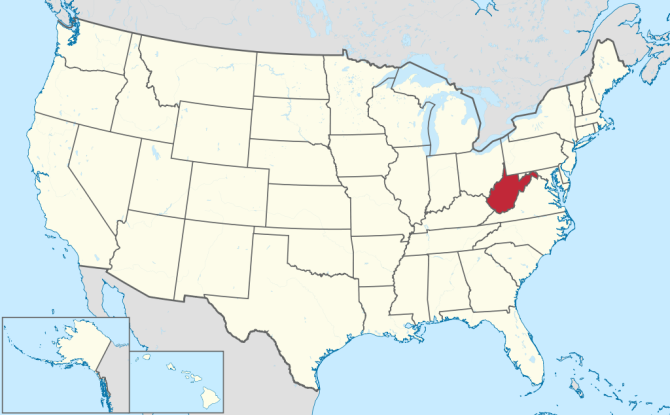