Wisconsin is a state in the northern United States. The state is located in the Great Lakes region, and has 5.8 million inhabitants (2021). The capital is Madison, the largest city is Milwaukee. The state has an area of 169,790 square kilometers and is therefore more than four times the size of the Netherlands.

I-41 between Oshkosh and Fond du Lac.

Wisconsin is located on the western side of the Great Lakes region, which has a shoreline on Lake Michigan and Lake Superior. The state borders Michigan, Illinois, Iowa, and Minnesota. The state measures a maximum of 500 kilometers from north to south and 470 kilometers from west to east. Southeastern Wisconsin is flat and consists of prairies and several lakes, including the large Lake Winnebago. To the west is the Mississippi River valley and to the north the St. Croix River. The landscape is increasingly forested to the north. There are some low hills in the state, especially in the west and north, but none of these are high. The 595-foot Timms Hill is less than twice the average elevation in Wisconsin. In addition to the aforementioned rivers, the Wisconsin River, Chippewa River, and Menominee River are major rivers.

The state has a humid continental climate with warm summers and cold winters. The average maximum temperature in Madison is -3°C in winter and 28°C in summer. The forms of extreme weather are sporadic tornadoes and blizzards in winter.

Wisconsin has a diverse economy, the main sectors being manufacturing, agriculture and healthcare. Wisconsin is nationally known for its cheese and butter production. The tourism sector is not that big, the state lacks major attractions, most tourists are holidaymakers on the many lakes. One of the most famous tourist attractions is the area surrounding the small town of Wisconsin Dells.

Population of Wisconsin is distributed as followed:

Wisconsin had a very fast-growing population in the 19th century, from 1,000 in 1820 to 2 million in 1900. Population growth was slower in the 20th century, the 4 million mark was exceeded in the 1960s, but growth has since weakened further to well below the US average. By far the largest conurbation is that of Milwaukee. In the northeast are the so-called ‘Fox Cities’ around Appleton. See list of cities in Wisconsin.

The first Europeans in the area were French from Canada in the 17th century. The French influence can be recognized in the many French place names in Wisconsin. The area was subsequently claimed by both the French and British, and later in the 18th century by the Americans. It was not until after the War of 1812 that the United States gained definitive influence in the area and the area quickly became popular with migrants from the east through mining, particularly in the north of the state. Southeastern Wisconsin was cultivated by New England farmers. Beginning in 1787, the area was known by various names, first the Northwest Territory, then the Indiana Territory from 1800, the Michigan Territory from 1805, and finally the Wisconsin Territory from 1836. The Wisconsin Territory covered all of the land westward to the Missouri River for the first two years. river, including all of Iowa and Minnesota and parts of South Dakota and North Dakota. As of 1838, this included only land east of the Mississippi River, including northeastern Minnesota. In 1848 Wisconsin became the 30th state of the United States. 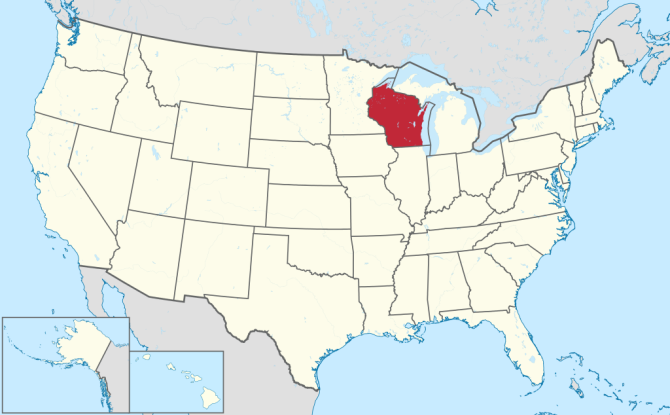