Wyoming is a state in the United States. The state has 579,000 inhabitants (2021) and the capital and largest city is Cheyenne.

Wyoming is located in the western United States, on the transition from the High Plains to the Rocky Mountains. The state clockwise borders Montana, South Dakota, Nebraska, Colorado, Utah, and Idaho. The state has boundaries along latitudes and longitudes, forming a square with them. The state measures 600 kilometers from west to east and 440 kilometers from north to south. It is the ninth largest state in the United States by area.

The Rocky Mountains in Wyoming are more interrupted than in Colorado and often form isolated mountain ranges that rise above the plateau. The northwest of the state is the most mountainous, surrounding Yellowstone National Park, the Wind River Range, and the Teton Range. In the central north lie the striking Bighorn Mountains. To the south are the Laramie Mountains, Snowy Mountains and the Sierra Madre Range. The lower Black Hills lie in the northeast on the border with South Dakota. Between these mountain ranges are plains and vast valleys. Special in the central part of the state is the Great Divide Basin, there are no rivers flowing out of it and it is located in the Red Desert.

There are no major rivers in Wyoming, but some major rivers have their source in the state, such as the North Platte River, Yellowstone River, Green River, and Snake River. The state’s largest lakes are in the northwest, including Jackson Lake and Yellowstone Lake.

Wyoming has a continental and arid climate, with warm to hot summers and very cold winters. The wind often has free rein in the state. In winter, the Chinook Winds often temper temperatures. The average maximum temperature in Casper ranges from 0°C in winter to 31°C in summer. The precipitation in the state is often only 300 to 500 mm.

Wyoming’s economy is less diverse than other states, mainly due to the lack of large cities. The main sectors are energy, tourism and agriculture. Major tourist attractions include Yellowstone National Park, Grand Teton National Park, and Devils Tower. Agriculture dominates much of the state as more than 90% of the area is rural. The state is too arid for traditional agriculture almost everywhere, which is why Wyoming mainly has cattle ranching and ranching.

Wyoming has a favorable tax environment, with low taxes. This attracts many famous Americans from California, who mainly live around Jackson Hole. Wyoming is listed as the most favorable state for business.

Wyoming has the smallest population of any US state and is the second most sparsely populated. Wyoming has no major cities, only Casper and Cheyenne have just over 60,000 residents. Unlike its neighboring states of Utah and Colorado, Wyoming also has no fast-growing cities. See list of cities in Wyoming. Wyoming’s population growth has seen peaks and troughs, often in quick succession. Population of Wyoming barely grew in the 1960s, followed by very strong growth in the 1970s, followed by a population decline in the 1980s. Since the 1990s, the state has been growing steadily again.

Wyoming was originally populated by Native Americans. The first whites in the area were trappers from Québec in the late 18th century. The Lewis and Clark Expedition of 1803 passed through northern Wyoming. The first reports of the natural beauty around Yellowstone were considered fictitious. In 1812 South Pass was discovered by an expedition, one of the easiest mountain passes in the Rocky Mountains. The Oregon Trail passed through this later.

Wyoming was originally part of the Spanish Empire and later Mexico and was part of Alta California. It was ceded to the United States in 1848 after the Mexican-American War. In 1865 the area was renamed Wyoming and was known as the Territory of Wyoming from 1868 and was named after the Wyoming Valley in Pennsylvania. Unlike Colorado No large deposits of minerals and gold were discovered in Wyoming, so that population growth in the Rocky Mountains in the late 1800s largely bypassed Wyoming. In 1869, women in Wyoming obtained the right to vote, the first territory or state where this was the case. Throughout the mid-1800s, the stories about Yellowstone proved to be no exaggeration, and in 1874 this became the world’s first national park. On July 10, 1890, Wyoming became the 44th state, in a period of strong population growth from 20,000 in 1880 to 62,000 in 1890. In the early 20th century, the state crossed the 100,000 mark, followed by the 200,000 mark in the late 1920s, 300,000 in the late 1950s, 400,000 in the late 1970s, and 500,000 just after the year 2000. 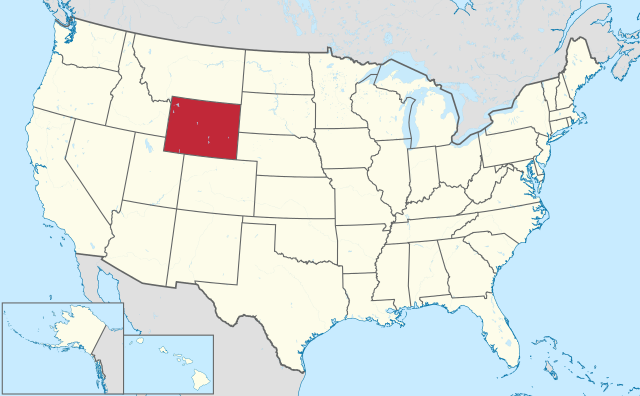