Arkansas (pronounced: Ar-ken-saw ) is a state in the United States, located in the south of the country. The state has 3 million inhabitants (2021). The capital and largest city is Little Rock. The area of Arkansas is 137,002 square kilometers, and is therefore more than 3 times the size of the Netherlands.

Arkansas is located in the interior of the southern United States, it borders Missouri, Tennessee, Mississippi, Louisiana, Texas , and Oklahoma clockwise. It is considered a southern state. The state measures a maximum of 445 kilometers from west to east and 390 kilometers from north to south. The Mississippi River forms the eastern border of the state, other major rivers include the Arkansas River through the center of the state and the Red River to the southwest. The state consists of an alternation of meadows, forests and hills. The Ouachita Mountains dominate much of the western part of the state, including the highest point, the 839-meter-high Mount Magazine. Eastern Arkansas is less forested, with paddy fields and pastures. There are several reservoirs in the state. The state has a humid subtropical climate with warm summers and mild to cool winters. The average maximum temperature in Little Rock is 10°C in winter and 34°C in summer. The state is prone to tornadoes’

Arkansas is one of the least prosperous states in the country, although the lower income is offset by a low cost of living. Arkansas ranks among other southern states as the cheapest states to live in. Eastern Arkansas has a lot of agriculture, elsewhere the economy is focused on services. The supermarket chain Walmart has its origins and headquarters in Arkansas. Defense is a major employer in Pine Bluff. Tourism plays a role of some importance, especially recreation in the natural areas. There are numerous state parks, and the Hot Springs National Park. In the north of the state is the Buffalo National River.

Arkansas experienced a rapidly growing population in the 19th century, from 1,000 in 1810 to 1.1 million in 1890. In the 20th century, Population of Arkansas experienced periods of growth and decline. Particularly in the 1940s and 1950s, the population shrank, but then showed strong growth again. The rate of growth fluctuates regularly. The state has several cities, the capital Little Rock is the largest city and also has the largest conurbation. Most other cities are located in the western part of the state, such as Texarkana, Fort Smith and the urban region called Northwest Arkansas. There are no major cities to the east, although some suburbs of Memphis, Tennessee are in Arkansas. See list of cities in Arkansas.  The strongest population growth is in the Northwest Arkansas region. This made Fayetteville the second largest city in Arkansas. The biggest shrinkage is in Pine Bluff, which has been one of the fastest shrinking cities in the United States since 2000. The city has major socio-economic problems and extreme crime rates.

One of the first Europeans in the region was the Spaniard Hernando de Soto who explored the area in 1541. In the 17th century, the French explored the state from Canada. The area fell under the Louisiana Purchase of 1803, which doubled the area of the United States. In 1819, the area was organized as the Territory of Arkansaw, but in 1936 became the 25th state of the United States with the name Arkansas. The name is often mispronounced, similar to the state of Kansas, while being closer to Arkansaw. 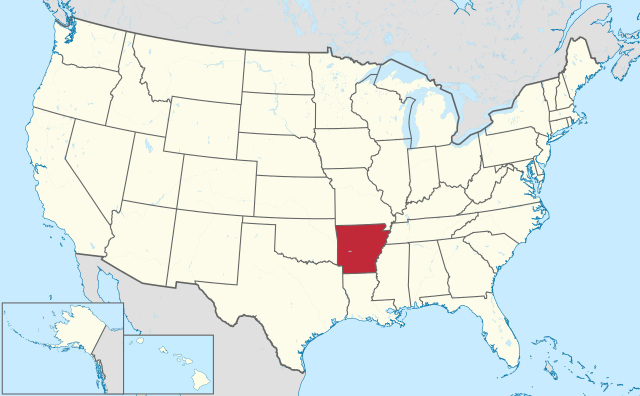