New Hampshire is a state in the northeastern United States. The state has 1.3 million inhabitants (2021) and the capital is Concord. The largest city is Manchester. New Hampshire has an area of ​​24,217 square kilometers and is the size of more than half of the Netherlands.

I-93 through the Franconia Notch of the White Mountains of northern New Hampshire.

New Hampshire is located in the northeast of the country, part of the New England region. The state has a short coastline on the Atlantic Ocean and borders Canada to the north, with the province of Québec. The state further borders Vermont to the west, Massachusetts to the south and Maine to the east. The state measures a maximum of 290 kilometers from north to south and 140 kilometers from east to west.

The southeast of the state is highly urbanized, the north is very sparsely populated. In the center and north of the state are the White Mountains, with the 1,917-meter-high Mount Washington as the highest point. In the middle of the state are several lakes, including Lake Winnipesaukee. The main river is the Connecticut River, which forms the western border with Vermont. Other rivers include the Merrimack River and the Piscataqua River. New Hampshire is densely forested almost everywhere. The coastline is not much longer than 25 kilometers and has some sandy beaches.

The state has a humid continental climate with cold winters and fairly warm summers. The average maximum temperature in Concord is -1°C in winter and 28°C in summer. The state is somewhat immune to hurricanes, but is sensitive to remnants of them.

New Hampshire is one of the most prosperous states in the country, especially in the Southeast, which is home to many people who work in Massachusetts. The far north is isolated and underdeveloped. Mining, especially granite, has historically played an important role in the state, earning New Hampshire its nickname the “Granite State.” The importance of the manufacturing industry has declined since the 1980s. Tourism plays a significant role, especially along the coast and in the White Mountains. There are numerous ski areas here and it is a popular weekend destination for city dwellers.

New Hampshire is one of the most white states in the country, although the proportion of Asians in particular has grown in recent years. However, there are few Hispanics and African Americans. Population of New Hampshire has never experienced an explosive growth like many other states. Population grew steadily from 184,000 in 1800 to 412,000 in 1900. The strongest population growth was between the 1950s and 1990s, when the population doubled, mainly due to suburbanization in the southeastern part of the state, which is an overflow area for expensive Boston. Population growth has since leveled off again. New Hampshire also has few larger towns. The state capital Concord is one of the smallest cities of all states. See list of cities in New Hampshire.

In the early 17th century, the first Europeans visited the area, mainly from Canada and Massachusetts. In 1623 the village of Rye was founded on the coast. In 1788, New Hampshire became the 9th state of the United States. In the 19th century, New Hampshire industrialized with the rise of weaving mills and the textile industry. In the 20th century, however, the importance of the industry declined. Beginning in the 1950s, suburbanization began to grow in the southeastern part of the state, making it the most populous part of the state. 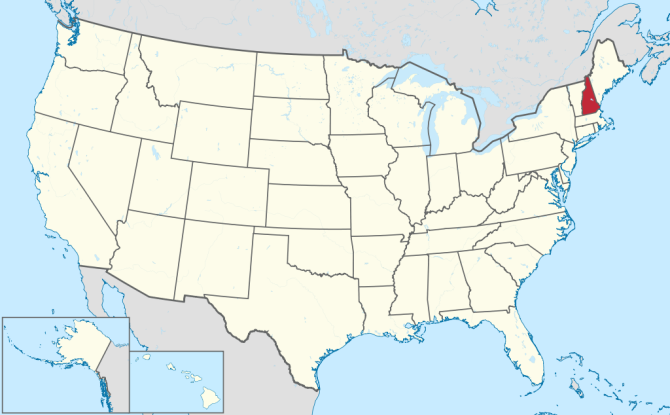