Hawaii (Hawaiian: Hawaiʻi ) is a state and archipelago in the United States. The state consists of several islands in the Pacific Ocean, nearly 4,000 kilometers west of the mainland. The state has 1.4 million inhabitants (2021) and the capital is Honolulu. The state has an area of 28,311 square kilometers, the size of three quarters of the Netherlands. The name is pronounced həˈwaɪiː

The state consists of a number of islands in the middle of the Pacific or Pacific Ocean. The main islands are Hawaii, Maui, Molokai, Oahu and Kauai. The islands are located 3,900 kilometers southwest of Los Angeles, 4,300 kilometers south of Alaska, 6,500 kilometers east of Japan and 7,500 kilometers northeast of Australia. The capital, Honolulu, is located on the most populous island, Oahu. The state consists of high mountains and volcanoes, the highest of which is Mauna Kea, towering 4,205 meters above sea level, and 10 kilometers above the seabed. The main island is Oahu and the largest island is Hawaii.

A misconception by map projections is the idea that Hawaii is west of California, when in reality it is much further south. The largest island of Hawaii is located 1,500 kilometers south of San Diego and on the same latitude as Mexico City. Hawaii is closer to the Aleutian Islands (which belong to Alaska) than the California coast. A trip from Los Angeles to Honolulu takes longer than from Los Angeles to New York.

The state has a tropical climate. Snow can fall on the highest mountains in winter. The island of Kauai is known for its rainfall, which amounts to almost 12 meters per year.

The main economic sector is tourism, because of the attractive climate Hawaii attracts tourists all year round. About a quarter of the Hawaiian economy comes from tourism. The state exports relatively little because of the great distance from other markets. Imports are therefore also expensive, and the state has a high cost of living. Home prices are among the highest in the United States, at more than 2.5 times the national average. The tax level is also relatively high.

Defense is an important employer in Hawaii, because of its strategic location the large naval base Pearl Harbor on Oahu is located, as well as Hickam Air Force Base. Marine Corps Base Hawaii is located near Kailua on Oahu. In addition, there are numerous smaller military installations and training areas.

Hawaii has a rapidly growing population, which is the reason for the high house prices. The vast majority of residents live in and around Honolulu. About two-thirds of all residents live on the island of Oahu. Honolulu is Hawaii’s only larger city, most other larger cities are suburbs of Honolulu. The cities on other islands are a lot smaller. See list of cities in Hawaii.

Population of Hawaii has a very different demographic compared to other states. It is the only state where Asians make up the largest population group. More than a third of all residents are of Asian descent. It is the only state where whites make up less than a quarter of all residents. Hawaii also does not have a high proportion of Hispanics. Nearly a quarter of all residents are “multiracial,” the highest proportion of all states. In addition, 10% of the inhabitants are from the Native Hawaiian or Pacific Islander group. The largest population groups in terms of ancestry are Filipinos, Japanese, Polynesians and Germans.

Hawaii was one of four states that were an independent country before becoming states of the United States of America. The first Europeans in Hawaii were Spaniards in the 16th century, but more famous is Captain Cook’s visit to the islands in 1778. After that, numerous Europeans came to Hawaii. These brought diseases to which Hawaiians were not immune, the native population halved during that time. From 1810 to 1893, Hawaii was a kingdom started by King Kamehameha. The Europeans started a revolution against the royal family in 1893, after which the Republic of Hawaii was established. In 1898 Hawaii was annexed by the United States as the Territory of Hawaii. Hawaii became world famous in 1941 after the surprise attack by Japan at Pearl Harbor. In 1959 Hawaii became a U.S. state, the 50th and final state, after an overwhelming majority passed a referendum. With the advent of the airplane, Hawaii became a major tourist destination. 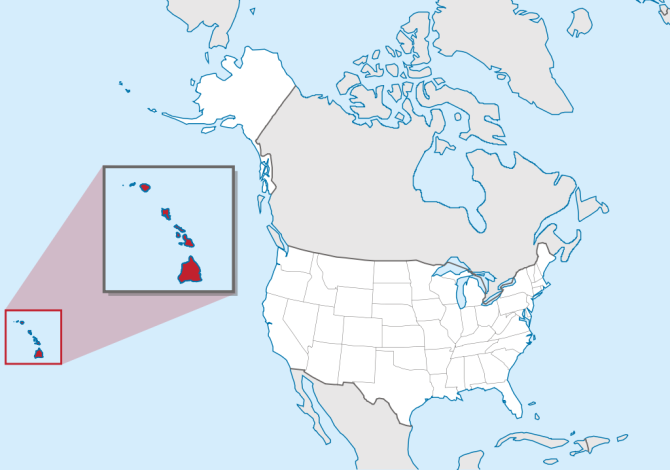