Iowa is a state in the United States. The state is located in the Midwest and also in the heart of North America. The state has an area of 145,743 square kilometers and is therefore 3.5 times the size of the Netherlands. The capital is Des Moines and the state has 3.2 million inhabitants (2021).

Iowa is located in the Midwestern United States, on the Great Plains. The state borders Minnesota, Wisconsin, Illinois, Missouri, Nebraska, and South Dakota. The state measures a maximum of 500 kilometers from west to east and 350 kilometers from north to south. The state is mostly flat, with monotonous prairies. There are no real hilly areas in Iowa, the 510-foot Hawkeye Point is the highest point but is only 150 feet higher than the average elevation in Iowa. The Mississippi River forms the eastern border of Iowa, here are some small runs. The Missouri River forms part of the western border. The major rivers in the center are the Des Moines River and Cedar River. Iowa has few forests, but does have scattered rows of trees. The state has a humid continental climate with warm summers and cold winters. The average maximum temperature in Des Moines is -1°C in winter and 30°C in summer.

Iowa has the character of an agricultural state, but most people live in a number of larger cities and often work in the service or manufacturing industries. However, there is little heavy industry. Like many rural states, Iowa has low unemployment and a favorable business climate. Well-known manufacturers in Iowa include John Deere, which produces agricultural vehicles, and Winnebago, which produces RVs.

Population of Iowa grew rapidly in the late 1800s, from 43,000 in 1840 to 2.2 million in 1900. This was mainly due to productive agriculture. Later, Iowa has become more urbanized. Iowa’s population is growing relatively slowly, being one of the few states to have experienced periods of population decline in the 20th century, between 1900 and 1910 and between 1980 and 1990. In 2010, Iowa crossed the 3 million population mark. This makes Iowa relatively sparsely populated.

The capital, Des Moines, is the largest city and conurbation and responsible for much of the population growth in Iowa. Although Cedar Rapids is the second largest city, there are two conurbations on the fringes of Iowa, the Quad Cities on the Illinois border, which includes Davenport and Bettendorf, and the city of Council Bluffs, which is a satellite city of greater Omaha in Nebraska. See list of cities in Iowa.

Iowa is a white state, nearly 90% of the population is white and there are relatively few Hispanics or African Americans. Iowa residents are mostly of western European descent. Population growth in Iowa occurs exclusively in urban counties.

The first Europeans in what is now Iowa were French from Canada in 1673. The area was then claimed by France and was French territory until 1763, which can still be recognized in the many French place names in Iowa. It then belonged to Louisiana, which was under the administration of Spain for some time. In 1800, France regained control of La Louisiana, but sold it to the United States in 1803 as the Louisiana Purchase. It was not until the mid-19th century that more American settlements began to be established in Iowa, the first permanent European settlement was in 1833, and in 1838 the Iowa Territory was organized. This included all land between the Mississippi River and Missouri River on the border with Canada, including parts of what are now Minnesota, South Dakota, and North Dakota. In 1846, Iowa became the 29th state of the United States, with its current borders. In the second half of the 19th century, Iowa was completely cultivated with agricultural areas and the population began to grow rapidly. Beginning in the 1930s, Iowa’s agriculture changed from small-scale farms to large mechanized farms. The proportion of residents working in agriculture fell sharply, with many residents moving to the larger cities, especially Des Moines, Cedar Rapids and Davenport. During the agricultural crisis of the 1980s, Iowa’s population shrank. 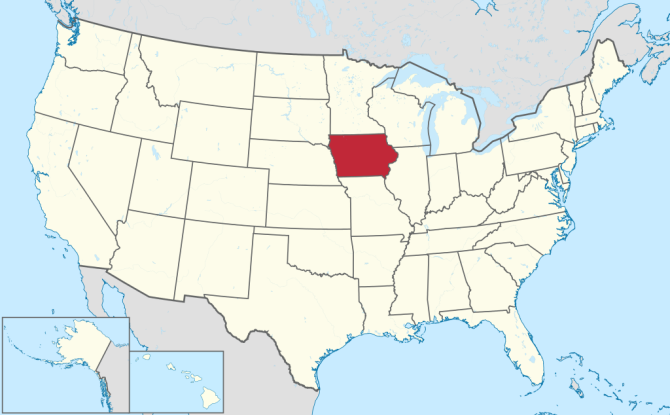