Michigan is a state in the northern United States. The state has 10 million inhabitants (2021) and the capital is Lansing. The largest and best known city is Detroit. The state has an area of 253,793 square kilometers and is more than 6 times the size of the Netherlands.

Michigan is located in the Great Lakes region and is surrounded on several sides by the Great Lakes. The state borders Canada and has a long border with the province of Ontario. The state further borders Minnesota (water line), Wisconsin, Illinois (water line), Indiana , and Ohio. The state measures a maximum of 730 kilometers from north to south and 550 kilometers from west to east. The state consists of two separate parts, in fact two large peninsulas. The south is formed by the Lower Peninsula. This is where most of the major cities are located and the majority of the population lives. The north is formed by the Upper Peninsula. The major lakes surrounding Michigan are Lake Superior to the north, Lake Michigan to the west, Lake Huron to the east, and Lake Erie to the southeast. Lake Michigan and Huron are one lake hydrologically, but are considered two separate lakes. In between are the Straits of Mackinac, a 6 kilometer wide strait. The lakes are so large that they look like a sea from the shore. Michigan also includes several islands in the Great Lakes,

Michigan is generally quite flat, although the Upper Peninsula also has some low hills. Northern Michigan is heavily forested, especially the Upper Peninsula, but also the north of the Lower Peninsula. Michigan’s major rivers are the St. Clair River and the Detroit River, which form the border with Canada in the southeast. Halfway between both rivers is Lake St. Clair. Elsewhere in the state, there are several short rivers, some of which are still quite wide due to the low drop.

The state has a continental climate with cold winters and warm summers. Southern Michigan has warmer summers and less cold winters than the north. In winter parts of the large lakes freeze over. Wind currents from the west over the Great Lakes often cause heavy snowfall on the Michigan shore in winter, called “lake-effect snow.” The average maximum temperature in Lansing is -1°C in winter and 28°C in summer. Extreme weather can occur in Michigan, especially winter blizzards. Tornadoes occur with some regularity in the extreme south.

Michigan was an important state in terms of population early on because of industrialization. The limit of 1 million inhabitants was exceeded between 1860 and 1870, at a time when the population grew rapidly. Between 1840 and 1890 the population increased tenfold. Michigan’s industry also attracted many African Americans from the South, who mainly settled in the major cities. The state experienced strong numerical growth between 1950 and 1980, when the population grew by 3 million. Population of Michigan today is almost 10 million, but the growth of the population has leveled off sharply after 1980. Between 2000 and 2010 there was even a slight contraction. In particular the city of Detroit is known as the largest shrinking city in the United States. There are also great contrasts here between rich and poor, with a poor central municipality and rich suburbs.

In Michigan, the metropolitan area of Detroit is by far the largest and has more than 4 million inhabitants. Nearly half of all Michigan residents live in Detroit or its suburbs. But the state has several medium-sized cities outside it, such as the capital Lansing, the city of Grand Rapids, and several smaller regional cities such as Flint, Saginaw, Bay City, Battle Creek, Jackson, Kalamazoo, Holland and Muskegon. Northern Michigan has few larger cities, almost all significant cities in Michigan are located in the south. Cities in the north are mainly known because they have a relatively large catchment area, not because of the large population. See list of cities in Michigan.

The state has a higher than average proportion of African Americans at approximately 14%. By contrast, Michigan has few Hispanics and only a small group of Asians, so white Americans are by far the largest group. African Americans mainly live in Detroit, where less than 8% of the population is white. Many Americans of Dutch descent live in western Michigan.

The first Europeans to arrive in the area were French in 1622. The first permanent settlement was Sault Ste. Marie in northern Michigan in 1668. The French were dominant in mapping and colonizing the state, which can be seen in the many French place names, including Detroit. Between 1660 and 1763 the area was under the control of France, but the area was then ceded to the British. It then became part of the British colony of Quebec, which existed until 1791. Detroit was Quebec’s third largest city in 1788. Michigan was conquered by the Americans in 1812-1813. With the opening of the Erie Canal in New York, there was a good transport connection with New York City, causing Michigan’s population to grow dramatically. In 1837, Michigan became the 26th state. The population grew strongly due to the construction of railroads that allowed Michigan’s economy to grow. Detroit was Michigan’s main rail hub.

From the beginning of the 20th century, the car industry in Detroit and the surrounding area began to grow strongly and Michigan became the most important car manufacturer in the United States. In 1920, Detroit was the fourth largest city in the United States. The city was booming during the 1920s with the construction of several skyscrapers. During World War II, Michigan produced many weapons and military equipment. From the 1960s onwards, the importance of heavy industry declined and Detroit began to experience a large population decline, in combination with the flight from the center cities, so that the city’s population changed radically within a few decades. Since 1880, Michigan has been one of the 10 largest states in the country, and was the 7th largest state in the country for 50 years, until it was overtaken by Florida in 1980.. In the 21st century, however, Michigan’s growth was limited, dropping it to the 10th state in the United States in 2020. 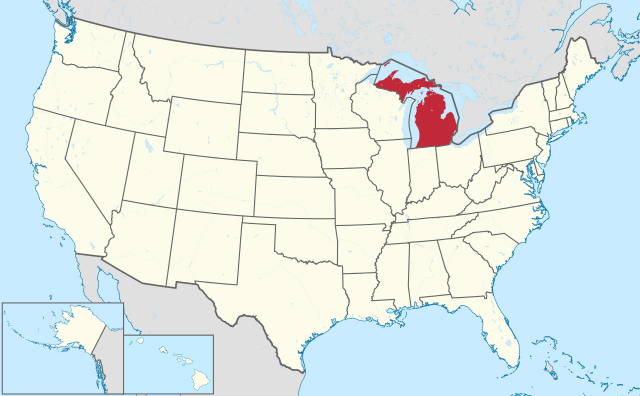