New Mexico is a state in the United States. The state has 2.1 million inhabitants (2021), and the capital is Santa Fe. The largest city is Albuquerque.

I-40 in Eastern New Mexico.

New Mexico is located in the southwestern United States. It borders the US states of Arizona, Colorado, Oklahoma and Texas. It also borders Utah via the ‘Four Corners’. To the southwest, the state also has a border with Mexico, which includes the Mexican states of Chihuahua and Sonora. New Mexico is a fairly large state, measuring a maximum of 625 kilometers from north to south and 550 kilometers from west to east.

The state falls largely in the Rocky Mountains, although there are no continuous mountain ranges like in neighboring Colorado. Isolated mountain ranges dominate the north and west of the state, with smaller mountain ranges elsewhere. Between the mountain ranges are dry and high plateaus. The east of the state is flatter and part of the High Plains. The highest point in New Mexico is the 4,011-foot Wheeler Peak. The Rio Grande flows through the state from north to south and is the only river worth mentioning. Large parts of New Mexico consist of barren steppe or desert, only the higher parts are forested.

New Mexico is one of the less affluent states, with average incomes usually in the top 10 lowest of all states. A lot of oil and gas is extracted in southeastern New Mexico, which is an extension of the Texas oil industry. The federal government spends a relatively large amount of money in the state, federal spending is twice as much as every dollar paid in federal taxes. Much of federal spending is on defense, there are three Air Force bases in New Mexico, a large testing ground (White Sands Missile Range), and historically the Los Alamos National Laboratory.

Population of New Mexico has grown relatively fast, but came from a low base. In 1900, the state had only 195,000 inhabitants, and it was not until 1970 that the limit of 1 million inhabitants was reached. In 2010, the limit of 2 million inhabitants was exceeded. New Mexico is therefore very sparsely populated. There are only a small number of larger cities. By far the largest city is Albuquerque, followed by Las Cruces in the south and Rio Rancho, a large suburb of Albuquerque. The capital, Santa Fe, is the fourth largest city and is the most important city in the north of the state. These are also the only four cities with more than 50,000 inhabitants. Elsewhere there are only small regional towns. See list of cities in New Mexico.

The state has the highest proportion of Hispanics in the United States, with nearly half of the population being Hispanic or Latino. In addition, there are many Native Americans, the second highest percentage in percentage, after Alaska. However, there are few African Americans. Almost a third of the inhabitants speak Spanish.

The first Europeans visited the area in the 16th century and it was known as Nuevo México from then on. The Camino Real became an important trade route within the Spanish Empire, from Mexico City to Santa Fe. The area was originally part of Nuevo España, from 1821 a part of Mexico when that country became independent. The extreme northeast of New Mexico was part of the French Empire, which was sold to the United States in 1803 as part of the Louisiana Purchase. After the Mexican-American War of 1846-1848, Mexico ceded the area to the United States. In 1850, the New Mexico Territory was created. It had 61,000 inhabitants at the time. The southwestern part belonged to Mexico for some time, but was purchased in 1853 as part of the Gadsden Purchase. In 1912, New Mexico became the 47th state. In 1927-1928 a lot of oil was found in the southeastern part of the state. During World War II, the first atomic bombs were developed in Los Alamos. On July 16, 1945, the first nuclear explosion was carried out with the Trinity test. 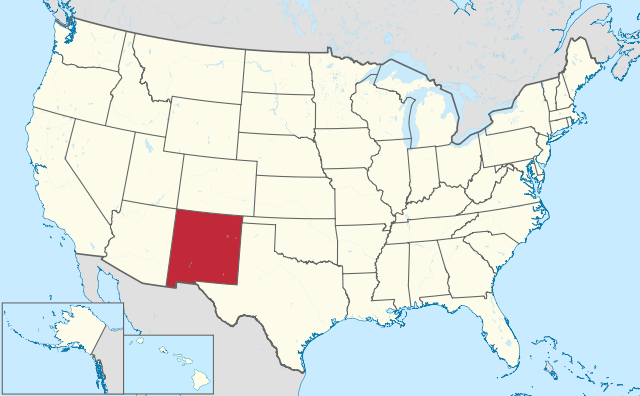