Virginia is a state in the eastern United States. The state is located on the Atlantic Ocean and has 8.6 million inhabitants (2021). The capital is Richmond and the largest city is Virginia Beach, part of the Hampton Roads conurbation. The state has an area of 110,785 square kilometers and is almost 3 times the size of the Netherlands.

Richmond, the capital of Virginia.

Virginia is located on the east coast of the United States, although the open sea coastline is relatively short relative to the size of the state. The state is bordered by North Carolina and Tennessee to the south, Kentucky and West Virginia to the west, and Maryland to the north. The state measures a maximum of 700 kilometers from west to east and 325 kilometers from north to south. The state is roughly in the shape of a triangle. The southernmost part of the Delmarva Peninsula belongs to Virginia. The large Chesapeake Bay has several estuaries, which converge at the Hampton Roads.

The state is flat to rolling in the east and center, with the Appalachian Mountains and Blue Ridge Mountains to the west. Several forested ridges run diagonally through the west of the state, interspersed with the famous Shenandoah Valley. The 1,764 meter high Mount Rogers is the highest point in the state. Several major rivers flow into estuaries in the east of the state. The Potomac River forms the border with Maryland, and the James River is the main river in the center of the state.

Virginia has a predominantly humid subtropical climate, which is warmer in the south and east than in the west and north. The average maximum temperature in Richmond is 9°C in winter and 32°C in summer. The state is prone to tropical storms and hurricanes, especially the southeast around the Hampton Roads region.

Virginia has a rapidly growing economy and is increasingly a dominant state on the East Coast. There is a lot of employment in the suburbs of Washington, DC Heavy industry is mainly in the Hampton Roads conurbation, especially port-related. Much West Virginia and Kentucky coal is exported here. The US Navy has an important base in Norfolk where thousands of people work. Per capita defense spending in Virginia is the highest of any state. Major defense-related employers are located in Virginia, such as the Central Intelligence Agency, US Navy, the Department of Defense (Pentagon), and Quantico Marine Corps Base. There is a large supply industry to the defense sector, especially northern Virginia. This is also one of the wealthiest parts of the United States.

As early as 1830, the 1 million population mark was crossed, and Virginia has continued to experience strong population growth throughout the 20th century. Population of Virginia grew from 2 to 4 million between 1910 and 1960 and from 4 to 8 million between 1960 and 2010. The strongest growth has occurred in the Northern Virginia region, which includes the suburbs and satellite cities of Washington, DC. This is a sprawling suburban area. The other major metropolitan regions are the Hampton Roads around Norfolk and Virginia Beach, and the metropolitan area around Richmond, Virginia’s capital. Virginia Beach is actually a suburb, but is the largest city in the state. See list of cities in Virginia.

The first Europeans visited the area in the 16th century, these were Spaniards and English. Already at that time the area was called Virginia. In the 17th and 18th centuries there were several wars and conflicts with the Native Americans who lived in the area. In 1788 Virginia became the 10th state of the United States. The state was larger at the time and included what is now West Virginia is. At the first census of 1790, Virginia was the largest state by population. At the start of the American Civil War in 1861, 48 counties seceded from Virginia and have been known as West Virginia ever since. Virginia was the epicenter of the Civil War, no state had as many battles as Virginia. Shortly after the Civil War, Virginia grew only slowly and became a less dominant state, declining every census between 1850 and 1910, eventually becoming the 20th state in population. Later in the 19th century, Virginia began to industrialize, with Newport News having an important role in building large ships for the US Navy during World War I. Southeastern Virginia became the primary home port of the United States Navy from then on. During World War II, the Department of Defense was located in Arlington, which is known as the Pentagon. Thus began Virginia’s role as a defense-related economy. The CIA headquarters in Langley was built between 1959 and 1961. With the growth of the suburbs in Northern Virginia and the many federal dollars flowing to the state, Virginia gradually regained importance in American politics, rising from the 20th state in 1930 to the 12th state in 1990. 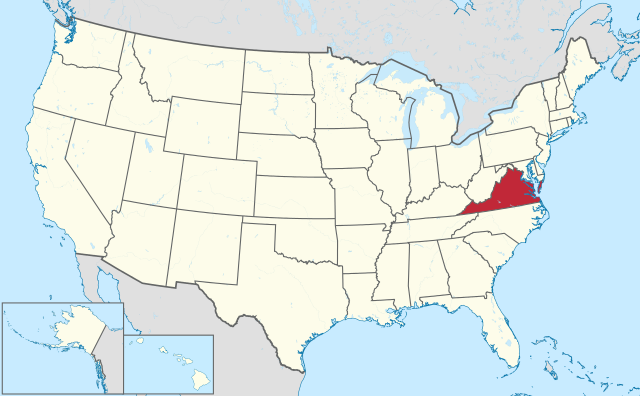