Connecticut (pronunciation: /kəˈnɛtɪkət/) is a state in the northeastern United States. The state has 3.6 million inhabitants (2021) and the capital is Hartford. The largest city is Bridgeport. The state has an area of 14,356 square kilometers and is therefore about the size of one third of the Netherlands.

The state is located in the northeastern United States, part of the New England region. It is located on the Atlantic Ocean, mainly on the Long Island Sound. Connecticut borders the states of New York, Massachusetts and Rhode Island. The state measures a maximum of 145 kilometers from west to east and 115 kilometers from north to south. Connecticut is flat to undulating and densely forested almost everywhere, with almost no open areas with pastures. The coastline has many bays and coves. The Connecticut River is the state’s main river, with the Housatonic River flowing to the west. The state has a predominantly humid continental climate with warm summers and fairly cold winters. The average maximum temperature in Hartford is 1°C in winter and 29°C in summer.

Connecticut is considered the most prosperous state in the country, but there are big differences, with the city centers being relatively poor, surrounded by prosperous suburbs. Connecticut has the second largest inequality of any US state. The state has the third highest level of tax in the United States. The most important economic sector is the financial sector, especially in the Southwest and in Hartford. The manufacturing industry is relatively important in the state, relying mainly on a small number of large employers. Well-known is the Electric Boat yard in Groton, where submarines are built. Connecticut has a relatively large aviation industry, such as Lockheed Martin, Sikorsky and Pratt & Whitney. There is also a fairly large arms industry.

Connecticut is a relatively slow-growing state. The state also grew slowly in the early years, from 238,000 inhabitants in 1790 to 371,000 inhabitants in 1850, followed by a growth spurt to 1.1 million inhabitants in 1910. Due to suburbanization (partly from New York) the state grew relatively strongly in the years ’50s and ’60s, but growth has leveled off sharply since 1970. The high level of taxation attracts few new businesses and domestic migrants. Population of Connecticut are a fair reflection of the U.S. average, but the population is more urban than many other states. Large parts of Connecticut consist of suburbs with low building density. The state has 5 cities with between 100,000 and 150,000 inhabitants, but the urban areas are much larger because most residents live in a suburb. The major urban centers are Bridgeport, Hartford and New Haven. See list of cities in Connecticut.

The Dutch were the first Europeans to visit the area that would later become Connecticut. In 1614 a Dutch fort was built in Hartford. In the first half of the 17th century many English came from Massachusetts, and the Dutch had to give up the fort in 1654. Several Connecticut towns were founded in the first half of the 17th century. Connecticut became the fifth state of the United States in 1788. In the second half of the 19th century, Connecticut industrialized heavily, and its high population density provided a dense network of railroads. The state became important from the First World War because of the defense industry, especially the construction of submarines. After World War II, the suburbs grew strongly, partly due to a migration from New York City to southwestern Connecticut. 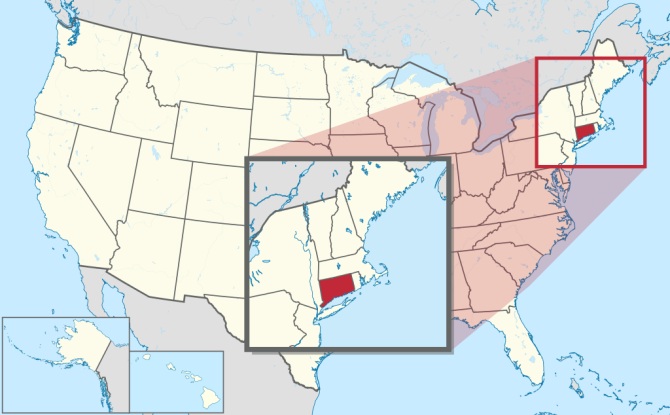