Idaho is a state in the western United States. The state has 1.9 million inhabitants (2021) and has an area of ​​216,632 square kilometers and is therefore more than 5 times the size of the Netherlands. The capital and largest city is Boise.

Idaho is a large state and borders Canada ( British Columbia ) to the north. It also borders Montana, Wyoming, Utah, Nevada, Oregon, and Washington clockwise. Idaho measures 770 kilometers from north to south and from east to west 70 kilometers to the north and 480 kilometers to the south. The shape of Idaho is somewhat striking, the shape is also called a ‘boot’ (shoe).

Idaho has vast tracts of wilderness, especially in the middle of the state. Major mountain ranges of the Rocky Mountains are located in the state, such as the Sawtooth Range, the Salmon River Mountains and the Lost River Range in the middle, where Borah Peak is located, the highest point in the state at 3,861 meters. On the border with Montana lies the inaccessible Bitterroot Range. Southern Idaho also has flatter desert areas.

The largest river is the Snake River, which forms part of the Oregon border through the spectacular Hells Canyon, the deepest canyon in the United States. Other rivers of interest are the Salmon River and the Pend Oreille River.

Idaho has a relatively diverse economy for a state in the north of the Rocky Mountains. Agriculture still plays a major role, a well-known agricultural product of Idaho being the potato. Forestry is also an important sector, as is the paper industry. Idaho has fewer resources than most neighboring states. The state also has a lot of high-tech industry, especially around Boise. In southern Idaho is the sprawling Idaho National Laboratory, a nuclear research center. Idaho’s tax environment is seen as favorable, attracting many high tech and IT companies from the West Coast.

Idaho has long been viewed as a rural state, with few large cities. Population of Idaho grew quite slowly for a long time, from 431,000 in 1920 to 712,000 in 1970. In recent years, however, the population has increased strongly, between 1990 and 2010, the population increased by 55% (561,000 inhabitants), with most of the growth taking place around Boise. Here several places have now grown together into a fairly large urban area, with cities such as Nampa, Caldwell and Meridian. About a third of all Idahoans live around Boise. See list of cities in Idaho.  Idaho doesn’t have as many Hispanics as states further to the (south) west. In 2017, Idaho was the fastest growing state in the United States.

The first whites in Idaho were trappers from Québec. Lewis and Clark’s expedition from 1804 to 1806 passed through central Idaho. The area was known as part of Oregon Country in the early 1800s, which has been undisputedly a part of the United States since 1846. The Idaho Territory was established in 1863. The first major permanent town in Idaho was Lewiston in 1861. Since 1890, Idaho has been a state, at the time it had a population of 88,000. Idaho’s economy in the early 20th century was based on agriculture, forestry, and mining. Idaho has been growing at a rapid pace since the 1970s, surpassing the 1 million population mark in 1990, quickly followed by the 1.5 million population mark in 2010. In the early 2000s, Idaho was one of the fastest-growing states in the world. country. It’s an overflow area for the expensive cities on the west coast. 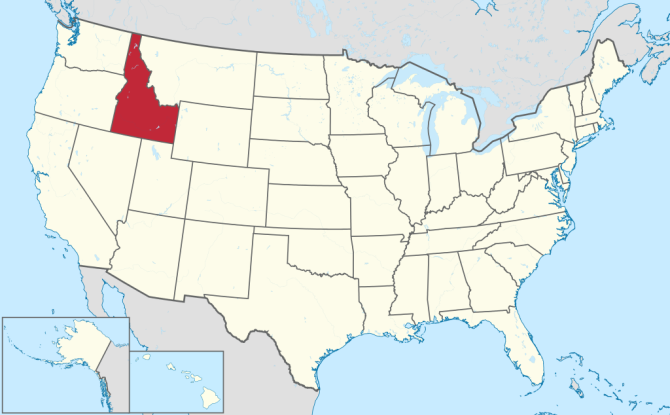